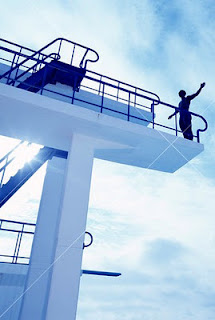 During my BMT, recruits were supposed to do as they were told; no buts about it, even if it was dangerous. It did not matter if you were ready or not. You either do it or get punished. One such instance happened during Pool Training.

When we trained at the pool, we swam laps, practiced water treading and learned simple survival skills such as turning pants into air-holding floats. The pool in ITD belonged to the Navy's midshipmen school then. It had an old-fashioned three-level diving platform that seemed to reach the sky. I think the top-most level was some 4 to 5 storeys tall.

To train our courage, we all had to leap from the highest level and jack-knife (feet-first) into the pool. I tell you, there is nothing scarier than standing on a narrow platform that high up in the sky! The pool suddenly shrinks into a thimble of water. Your knees become involuntarily weak, you buckle over. I think that platform did not even have a railing for one to hold on to. So you can imagine the sheer terror on everyone's faces. Mine included.

At least for me, I had some boyhood experience jumping off an old jetty into an open sea. This was right next to the Johor-Singapore causeway, right where the Shell refinery is (the old Ruthenia Oiling Jetty). For many of my platoon mates, flinging themselves off that diving platform was their first time. That high height simply compounded their fear many times over.

As I've mentioned earlier, you had to do whatever your NCOs told you or else there would be consequences if their orders were not obeyed. And so we jumped.

There were a couple of guys who were particularly terrified. But they were coerced into jumping as well. I remember holding my breath, hoping that nothing untoward would happen. In swimming I've learnt that the surface tension of unbroken water can be as hard as concrete. It can be fatal if you happened to land smack squarely on it. Sport divers in the past have become paralysed because they had miscalculated their entry. This is the reason why at platform diving events today, pool water directly below is sprinkled with jets of water. They break the surface tension and help prevent serious injury.

Looking at my platoon mate up on that diving platform, I am praying that he will keep his composure. Paralysing someone's son during NS is something you do not want on your conscience. But I think our corporals and sergeant took that as just NS training collateral. If you did not jump, you were "chicken" and would be taunted the rest of your BMT days. In the end, we did what we would do at any jetty - we volunteered to jump together. That's how some of us got through that scary phase. And you had to jump in order to pass the Watermanship Test.

I think this particular high-dive exercise was made obsolete when ITD moved to Pulau Tekong. It was just too dangerous and risky a thing to do. In any event, it is better to jump into the sea than into a pool of static water.

Another dangerous exercise was grenade training. Each infantry soldier then was expected to carry four grenades on his SBO, so learning to throw one was essential, and in war time, life-saving.

Throwing a grenade looks simple. You see it all the time in those Longest Day-type war movies. For me, my tuition came from watching Vic Morrow in that '70s Combat! TV series. Vic could often be seen pulling the grenade ring tab with his teeth and thereafter artfully lob the grenade over to his enemies. Usually it is aimed at an enemy's sandbagged position after his men had done a flanking movement. Vic hit the target every time. I sometimes wonder why he didn't throw it like in "hentum bola", a boyhood game.

In reality, throwing a grenade is not that simple. Sure, it is like throwing a rock. But this rock has a spring lever attached to it. The lever would give a kick in your palm as the grenade springs away. If you do not adjust for that, your grenade will veer off target. It's even worse throwing it like in hentum bola. The grenade will probably land just a few feet in front.

This was precisely what happened at a Live Firing session when one of my platoon mates, Keng - a rather blur fella - was chosen to throw his maiden grenade. Instead of it flying forward and outward, it went straight up, knocked itself on the edge of the protective barrier and fell (thankfully) on the other side. Mad Dog Wee (our platoon commander) was quick to grab Keng and throw him on the ground. The rest of us braced ourselves. The grenade exploded louder than usual but none of the shrapnel came our way.

Mad Dog Wee was so furious he rapped Meng a few times on his helmet. "You bloody idiot!" he shouted. You could see veins in his neck popping. It's a demeaning act to knock someone on the helmet; not unlike scolding a child. But back then, it was accepted practice. It's also the reason why the corporals and sergeant always carried a stick around. Never mind if that stick was an unpolished twig picked up from the ground.

As an officer, I would later revisit the grenade throwing range. - Not just to teach cadets about the art of throwing a lobbed bomb but to defuse any that might have been duds. It was one of the more dangerous tasks of a Demolition man. The reason was simple: Each grenade had been timed to a 4.5 sec fuse. If it did not explode, it could be due to a couple of reasons: (1) The firing pin inside got stuck; (2) The fuse itself was faulty due to poor manufacture (or storage). In many cases, it was better best not to handle a misfired grenade. The better option would be to blow it up with another block of explosive from where it laid. Besides, a grenade-throwing range would often be steep-sloped and sandy, making any defusing action dangerous and altogether rather risky.

Oh, another thing about grenade throwing: That pin which held the lever in place and that which prevented the grenade from firing is not that easy to pull out. In the movies, heroes would always pull them out with their teeth (the latest instance could be found in Inception). Try that in real life and the heroes would probably be using dentures for the rest of their lives! If these pins were that easy to pull out, you wouldn't want so many grenades hanging off your SBO. One false move (like crawling on the ground) and the safety pins would come off easily. Certainly not the kind of situation to find yourself in. Therefore, for the sake of smiling with a set of nice pearlies for the rest of your life, don't try pulling the grenade pin out with your teeth. Ask your buddy to do it. That's what friends are for.

Next story: The Story of Winnie
Related story: Golf Company
Posted by TC Lai at 12:39 AM