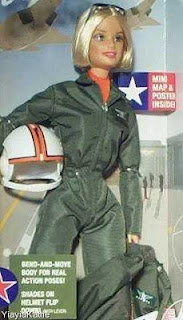 One positive thing about being part of the Demolition Team in OCS is that our office was in the Golf Company Block. In OCS at the time, the cadet companies (three platoons make a company) were housed in A to G blocks. A-B-C on one side of the road, F-E-D on the other side. They formed a U-shape with C and D blocks the furthest in. For some reason, the first block before A was designated as G Company, which only housed female cadets when their Officer Cadet Course was in session.

If women find men attractive in uniform, I can say the same of men finding women irresistible in such attire too. That bearing, that tautness of the uniform, that swept-up hair bunned up to expose the slender nape of neck, etc. - It all combines to scream smartness and sensuality. It's no different from a comely office-lass togged in a power suit. The only difference would be the missing high-heels!

But during my time in OCS, there were some very sweet Golf cadets and officers. (In army-speak, the letter G stands for the word golf.)

During my NS, SAF women held mostly non-combat positions: Admin Head or something; It's from what I observed in OCS and read from Pioneer Magazine during that time. I suppose I could have done better to find out more. But the population of female officers was low in SAFTI then. Many were also based away at the Infantry HQ near the entrance of the camp away from OCS. Away from the prying eyes of us hormone-raging boys.

If Capt Tan was attractive, her platoon commander was even more so and together they were a double whammy to us female-starved officers in OCS.

It made our work at the Demo Team Office both a pleasure and a distraction. Our office was on the ground floor in a corner of their block. I remember we had to keep our distance and not enter their premises without valid reason. The staircases in their block were actually gated; the male cadet ones were not. OCS rules were strict like that. After all, we guys there outnumbered the girls like 25: 1.

As cadets, we were very curious about our female counterparts and would steal glances whenever we bumped into them in or outside the cookhouse. I am sure they all felt like diamonds being ogled at by pauper thieves.

I still remember the face of one cute girl we boys all talked about. She had straight hair, sparkly eyes and a cute button nose. She was in the mould of actress Felicia Chin but with some steel. We would eventually get to know her at our passing-out party. That's what the school tries to do every time, create opportunity for us boys and girls to meet and pair off.

A female friend who was in Nursing and who had hosteled at the Singapore General Hospital during her training days told me they were often smuggled out to RSAF officer commissioning parties. So if you happen to know a couple who is an Airforce pilot and nurse, you would know how they have met. It was sneaky the way the government tries to get people hitched. Start with the uniformed services as they are most obedient and available.

The lady cadets in Golf Company learned a different syllabus during their Officer Cadet Course. It included Basic Military Training. One of the courses during BMT was grenade throwing which my team would help conduct. This gave us reason to get up close and personal with the female cadets.

My bachelor Sgt Lee was particularly cheered by it, as was Sgt Charles who had a girlfriend. However, that kind of training isn't suited to socialising at all. One false move and people you like could be blown to kingdom come.

Not a few times, their grenades failed to go off. We would then have to descend down the sandy slopes of the firing range to get rid of the duds. It was all rather harrowing and after a while, we decided it was better to be stuck in the office playing computer games then go and help them with the lessons. But it was all wishful thinking as we were the only ones qualified to teach grenade lobbing and clear blinds.

In any case, the presence of the Golf Company Cadets added a soft touch to an otherwise all-male environment. In some sense, they reminded us of our duty to protect and serve. Our girlfriends, sisters and mothers - people who often hold the fort at home - are our responsibility to protect come war. I know it is male bravado chest-beating, but it is this that makes our training more sensible and a little more bearable. If we ogled at the Golf Cadets, it was our National Duty!

Besides, with the comely Golf Company Cadets in the cookhouse, Army Food always seemed to taste a whole lot better!