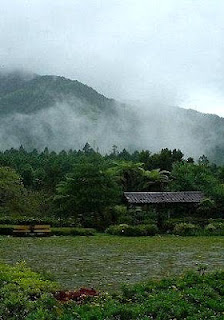 I think as a cadet, we all looked upon our impending training in Taiwan as some sort of expansive military training that included travel. It's not the same as Brunei. Brunei was more jungle and back to basics. Taiwan, we romanticised as a place of natural beauty with scenic and spiritual mountains and valleys and rice fields.

We also understood that in Taiwan, Point A to Point B would be wholly further than the same two points in Singapore! But that's ok. The cool weather in Taiwan made walking that distance a pleasure (or so we imagined).

We went to Taiwan during our Senior Term in OCS when we were already "lao chiau" (old bird) cadets; it was just another exercise for us (named Ex Starlight). But to those who were vying for the Sword of Honor award, Taiwan training was proofing ground for appointment holders. I had no such aspirations, so I pretty much looked forward to our "holiday" trip.

To Brunei, we flew on C130 cargo planes; to Taiwan, we took SIA planes. That itself said something very different about our training focus.

From the airport, we took a long bus ride to Hengchun - a dusty outpost right at the southern tip of the Taiwan island.

We stayed in old single and double-storeyed brick/plaster buildings with peeling paint, and slept on communal wooden bunkbeds (long, wide ones). We did everything communal then. When we bathed, we scooped cold water from a waist-high cement trough in the centre of the bathroom. When we pooped it was a squat over a long drain that ran through all the cubicles. God bless if the person in the cubicle before you was having diarrhea; everything would just run by you if someone flushed. As you can expect in such a situation, toilet ceremonies were accomplished with a minimum of fuss. Who could loiter and read in such conditions? (The rush to the toilet was usually to "secure" the use of the first toilet in the row, to avoid all the other "shit", so to speak!)

Although training was tough, I enjoyed my Taiwan topo the most. We crisscrossed mountains and many farmlands. The scenery was unlike anything most of us have seen, not even in Malaysia, except perhaps Cameron Highlands. There were a couple of memorable incidents: One time, my topo group bumped into another and we decided to join force. The six or so of us were hungry and thirsty. Not long after, we chanced upon an orchard and walked by a pomelo tree with some 12-14 ripe fruits hanging invitingly in the air. The tree was average sized but narrow, no taller than the usual rambutan tree in Singapore. We knew the fruits were ripe because a few had already dropped to the ground.

Having eaten all the fruits we could pick up (and checking to see that no one was around) we used the last pomelo as a tossing cannonball to knock the others off their high perches. Down they came with hardly a dent (there was ample of us to catch the falling ones). Incredibly we sat there and ate them all up, cradling our rifles all the time in case we needed to scoot. That was one satisfying fruit "robbing" trip, better than drinking those instant lemonade drink the SAF provided in our combat rations. The pomelo juice was all natural!

However, as good soldiers, we felt guilty looking at the bare tree afterwards and so decided to leave some money behind as recompense. We jammed the notes into the latch-lock of a small shed by the tree. We hoped the amount would be enough for what we took! Oddly enough, that was the only pomelo tree there. Perhaps we were destined to run into this "giving" tree*, haha. (*A Shel Silverstein book reference.)

Another time, after sampling some soft and juicy pear-sized guava fruit (walking through an orchard no less), we came upon a stretch of light forested area that was filled with large grey spiders. Usually chatty and talking cock during open topo trips like this, we for once shut up and held out our rifles in front of us. That way, we could break any web that might happen to lay across our path. The way we were supposed to go was a footpath through a light secondary forest; we had little choice but to continue. With so many spiders to the left and right of us, the whole passage was quite unnerving. Besides, the situation was made worse with daylight failing. Fortunately, we managed to tiptoe our way out of there without incident. No spider attacked us nor anyone turned hysterical!

At the end of the path, we turned each other round to make sure no eight-legged furball hitched a ride on our SBOs and full-packs. And guess what? We later learned that Taiwan was home to giant brown tarantulas as well. I guess it was good that we did not know that fact earlier or else we would have high-tailed out of there like schoolgirls seeing a ghost. That would have caused some post traumatic stress disorder or PSTD, eh? Man, that would be most embarrassing!

I enjoyed topo-ing through the south of Taiwan very much. It was all very scenic and nostalgic. Often we would come across some charming hamlet with an old Chinese house dating back to the early century, set in some valley painted rush yellow by rice fields waiting to be harvested. There would be streams trickling by stone embanked roads or into rock pools.

The households were often friendly, and the hamlet store owners happy to make us tired soldiers a nice bowl of cup noodles. The kids loved our SAF-issued hardtack biscuits because the taste was actually milky. I liked them biscuits too and would off-load any we could spare to the hamlet kids running up to us chanting "ah ping ge" (Big Brother soldier). One time I even saw the hardtack biscuits being sold from a tin in a hamlet shop still packed in their dark green army packaging.

Another thing about the kids was that they were always very tanned, looking very much like Malay or Thai children. I think it had to do with the fact that high up in the mountains, UV rays were stronger. The village men and women folk were also no less spared. No wonder they all wore long-sleeved shirts and covered their heads with a scarf or straw hat when out in the fields!

Up in the mountains, it would get very cold suddenly too. We then had no choice but to put on those smelly and scratchy SAF woolen pullovers. Taiwan was perhaps the only time we used them as coming from tropical Singapore we didn't need them usually. I wonder if such pullovers are standard issue still.

Food back in base camp was ok. The bonus was to be given the unusual produce from Taiwan's huge fruit industry. I had my first taste (or no taste, depending on one's reaction) of dragon fruit; as well as a green apple-ish fruit that had flesh the fibrous texture of celery stalk. I've not eaten or seen that fruit since.

Probably the toughest training we had during Taiwan was the one that involved digging defensive positions or a.k.a "trench digging".

The hill we Platoon 10 was assigned to defend was part of a mountainous range. As usual the place had been dug before by  a previous batch of trainees and finding a new spot there to dig became a challenge. That was not the only problem. The area had ready-made bunkers that we were all grateful to discover. Yay! No more digging or so we thought. We actually put the suggestion to our platoon commander, Capt Ang. Weren't we suppose to use existing structures whenever possible to save time and energy? Wasn't that what we were taught?

No, came the reply. Don't get smart-alecky with me, Capt Ang said. You dig.

And so, we "kuai kuai" returned to our positions and marked out our future trenches. We knew it was a long shot getting Capt Ang to agree as we were on a training exercise. But dang, staying in those mad-made bunkers would have been such a sweet deal! And so, not really disappointed, we dug and dug and dug. And dug some  more.

What was supposed to be a two-night affair turned out to be a four-night one with the trenches going no further than knee-deep. The trenches were supposed to be chest-deep by then. The earth was not hard but the rocks were, as were the roots of those tough, sinuous mountain trees.

We broke so many changkuls that Capt Ang finally gave the order to stop. We couldn't afford to sign any more 1206s (army doc for lost or damaged goods). We cadets also couldn't afford any more fingers for blistering either.

In the end, we went back to the original idea of using the existing structures. I was fortunate to be next to one and so organised noodle parties on the quiet for my cadet buddies who were on the same ridge line. That simple bunker shielded us from our imaginary enemies and our not-so-imaginary instructors. It kept the wind out marvelously for our stove-fires to keep going for churning up warm and comforting noodle soup. Man, what comfort!

Afternote: After some experience, my advice is not to have instant noodles. The chemicals play havoc with your bowel system (same with 3-in-1 teas and coffees). It's better to just have fruit. In any case, there's so much option in the supermart these days - from cup soups to cup noodles to packet cereal. Milo was fine but Horlicks we avoided because it made us heaty. And, instant beehoon was at the time a novelty.

Related story: Lantern Night and Brunei Training; Next: R&R in Kaohsiung
Posted by TC Lai at 9:45 AM