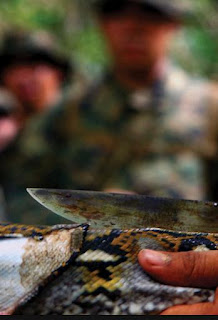 One of the things we learned before going to the jungles of Brunei for infantry training was Jungle Survival. The course equipped us with the necessary skills to survive when lost in a place like that. There are pluses and minuses for being lost in a jungle as compared to, say, the desert: it is a much better deal. For one, there's usually water and fruit. But if creepy crawlies and close spaces terrify you, then the jungle can be a nightmare. In any case, you don't have to go to Brunei to get lost. Singaporeans have been to known to lose themselves in a small green patch such as Mandai.

Our Jungle Survival training course was conducted by one of the Tactics Team instructor teams (TT1, I think). My batch in OCS was the second last one to undergo such a system of instruction. My cohort and I would later graduate to form the new Mentor system. This is something you can read more here.

The Tactics Team officer in charge of the JS course was a skinny chap known to be quite skilled in tactics but was also a rather humorous chap. It's always nice to have an instructor with a sense of humour. They usually make training so much more enjoyable.

But on that day, for some reason, Lt Goh KC looked out of his depth. He seemed rather unprepared. Staff Sgt Karu had to step in after the intro. He's our platoon sergeant and Ranger-trained. A portly Indian with a handlebar moustache, he had been known to catch stray dogs in Marsiling and cook them in curry. When out in the field, he was seldom without his khukri knife - a standard issue made popular by the Ghurka guards in Singapore. It was something the SAF folks liked to buy back when in Brunei or Thailand. Today, you can buy one from the army supply shops in Beach Road or that professional dagger shop in Chinatown. But buy a lousy one and it'll rust faster than you can put it back in its sheath!!!

Weighted at the kink of its blade, the khukri knife is designed for swinging and chopping like an axe. It's very good for slicing snake, for instance. And that was the first thing on the menu at our JS course.

As snake blood is nutritious, we were encouraged to kill one and suck on its blood. A python is ideal as it is large and voluminous. It's also non-venomous, which makes it a safer reptile to corner and catch. Just avoid pythons thicker than your thigh as they will coil you up in a death embrace.

I grew up with a neighbour with a python so I'm not too scared of one. I've also drunk pigeon blood before as a kid (see here). When Staff Karu sliced our course Exhibit 1 and asked for a volunteer to drink it, a few hands shot up, including mine. Willie, a tall strapping chap, was picked to go first. He sucked on the beheaded snake, which was about two inches in diameter. Nothing came out. Apparently Staff Karu was fooling around with him, squeezing the snake tight so no blood came out. When he did let go, blood splurted out and Willie got a bit of it on his face and PT shirt.

After that, I hesitated. Who would want to suck on the same snake with saliva all over it???

The chicken was next. It would be killed WITHOUT a knife. How? A cadet suggested jokingly to stomp on it. Haha, everybody laughed. No one knew the answer. (Strangely, no one suggested shooting at it.)

If you do not have a knife with you in the jungle, there is a technique to beheading a chicken. You grab it by the head, twirl it around and give it a good jerk. The neck would snap and the head separate, informed Lt Goh, who seemed to have recovered from his hangover and found his groove again.

To demonstrate, Staff Karu picked Cadet Lee, a rather effeminate but talkative fella. I think he knew what was gonna to happen. Cadet Lee got squeamish and did not get a good firm grip on the chicken. When he tried the Twirl-Clean-and-Jerk technique, all he accomplished was give the chicken a sprained neck. He even dropped the critter when it struggled. We now all have to chase the animal and get it back on the GS table with the rest of the (albeit inert) jungle food.

When Cadet Lee tried it a second time, the chicken died but its head was still attached. Sgt Karu gave him a look of exasperation. It was to tell Cadet Lee that he was a "useless bugger" - Staff Karu's two favourite words.

Staff Karu then took the dead chicken in one hand and with a sudden jerk sent the dead chicken flying without its head. Blood flew and splattered all over those sitting in the front row. Fortunately, we were all sitting outdoors on a grass patch by a training shed.

Lt Tan took out another live chicken and showed us again how it is done. This time, the head and body came apart in one clean motion. The body landed feet first and started running! "That's what is supposed to happen," he said, and jokingly added that it would remain 'fast food' for a while. He was right. The headless chicken ran in circles for a bit, got tired and dropped dead.

Staff Karu then proceeded to teach us how to cook the chicken 'jungle style'. It was similar in preparation to what I would buy later from JB: Beggar's Chicken - something wrapped in clay and cooked in a large charcoal ash pit. In the jungle, you use mud and pile a wood fire on top. You keep the chicken intact with its feathers.

In a documentary I once saw, some Thai islanders would cook the chicken in a different manner. They would wrap it in mud and put on the ground. They then place a clean and empty kerosene tin over the mud pack and pile a wood fire around it. The chicken seemed to cook better and looked a lot more appetising using this rural method then the 'bury-in-the-ground' method.

The next thing the instructors taught us was how to tell if certain fruits are edible. One way is to taste it. Another is to watch if animals would eat the same thing too (e.g. monkeys, as they are our closest cousins). The third way is to rub a little of its juice on the inside of your elbow. If there's no reaction, it isn't poisonous. But really, in a tropical jungle, there are many types of figs and berries (which are both nutritious and delicious). One just have to learn to distinguish between what is inedible and that which is not.

There are also underground roots like ginger, yam and tapioca to dig up. With ginger, teh alia (ginger tea) comes to mind.

Then the instructors talked about mushrooms. I didn't pay much attention to that. To me, mushrooms are high risk. I rather just avoid them all together unless I get expert advice. Then again, even so-called 'experts' have been known to make fatal mistakes.

The other important thing to do when lost in a jungle is to find water. Surprisingly, after our actual trip to Brunei, we realised that water was the easiest thing to find. It's all in the overhanging vines, the brown ones, that is. Chop one and the ends would drip with much water. The other way is to collect dew using a plastic sheet.

In Taiwan, we never drank water from a stream, no matter how clean it looked. Back in the 70s, many growers used pesticide and this had poisoned the water underground; hence streams and lakes too. So when we were there in the early 80s, we avoided outside water like the plague. Even the water purification tablets were of no help. I'm not sure if the situation has improved since.

The Jungle Survival Course ended with some talk about eating bugs. I know people roast locusts and even grasshoppers. But one look at the creature's greenish abdomen and I find it tough to bite into one. There's always this expectation of green-yellow goo oozing out. It's not pretty and probably not very palatable (and probably non-existent after cooking). I knew of Malay boys in Marsiling who did that when I was a teenager, roasting the critters at the disused Ruthenia oiling jetty.

In any case, ants are a better option. But if I am lost in a jungle, I think I'll just stick to a 'Fruit and Snake' diet. No fire required. But the best thing is not to get lost at all.

Next story: A Platoon of Characters
Posted by TC Lai at 10:22 AM