A Platoon of Characters 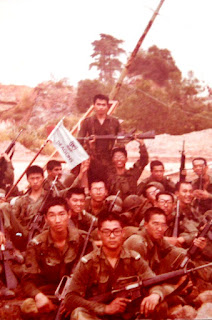 I remember my BMT platoon mates very well. They are etched in my mind because they were my first army buddies and hence hold a special place in my memory and affection.

But the people that really bonded with me most during NS training were the fellas from my OCS days. Nine arduous months is a long time to be stuck together.

First there was the three-month Junior Term. A handful of cadets did not survive this stage and were asked to leave. Most were sent to SAFINCOS to be trained as NCOs or non-commissioned officers (i.e. corporals and sergeants).

After Junior Term came the six-month long Senior Term. Folks who did well in SAFINCOS could join us. At the end of this term, you either graduate as an officer or not. If you didn't, it was very painful because it would seem that you had suffered the last six months for nothing. During my time, cadets who failed Senior Term were often given the default rank of sergeant.

My platoon mate Gulam was one such casualty. I didn't think he deserved it then. I believed it was a case my platoon commander being biased against Malay soldiers. He thought they were all kampung types and with a lazy attitude. (My PC was not unusual, most people thought the same then. It would take a while for the Malays here to be more educated and successful to change that stereotype. At least Singaporean Malays have become better perceived than their counterparts in Malaysia. The Malays there are still known for their "tidak apa" attitude, especially those working in the government services. Or at least that's what my Malaysian Chinese friends are telling me still.

Of course it did not help that Gulam was quiet and laid back as well. But he was intelligent and well-read. I wouldn't be surprised if he became an academic or something.

Gulam and I were trench-digging together one time on Marsiling Hill 265. He was super stealthy and somehow managed to cook instant noodles without anybody noticing, surprising even me. He had dug out a nook in the wall of the trench and put his cooker there. It was after four days of constant digging with combat rations so his noodles were a godsend.

On the day that OCS results were posted, we all came down from our bunks and milled around the chin-up bar area on the ground floor of our barracks. As results floated out of the OC's office, we were disappointed to learn that Gulam was not among those who passed. Instead, a cadet whom we had all despised did. (He failed his mission command badly and even took water from us.) Maybe PC Ang found Gulam wanting in command but that was not apparent to us his mates. I dunno, perhaps someday, when I bump into PC Ang, I will ask him for clarification. His decision bothered me a long time.

The default leader in our platoon was a stout and highly dependable guy named BC Chan. He was from Hwa Chong JC. Whenever he addressed us from the balcony, he booming voice would echo in the confines of our barracks. Although he was a no-nonsense take-charge type, he was still someone you could talk to; perhaps why I suppose he became everybody's favourite. He did go on to win the Sword of Honor that year. We often teased him for sweating profusely even when not doing strenuous exercise!

Helping Chan always were YM Lim and Bennett Tan. Lim was also an honest and earnest chap with an abundance of energy. His favourite phrase was "Come, let's go" once he set his mind on something. He was from St Andrews and friends with my BMT buddy Kum Fatt. He would play the role Kum Fatt did during BMT leading the platoon in song with me. Somehow, I found folks from St Andrews and CJC to be very outgoing and adventurous. Folks from Hwa Chong and National tended to be a bit more studious. They often preferred to read. I remember how Chan liked to read Chinese wuxia novels in his spare time.

Bennett was a tall skinny chap who walked with a stoop. Like Lim, he was not afraid to speak his mind. But he was non-confrontational and had a mediator-type personality. He also laughed easily and showed a lot of concern for his fellow mates. Bennett went on to join the Army and last I heard, he was of Colonel rank.

Quite a few fellas stood out in my platoon. There was Karam Singh with his unmistakable mustache. He was tall and Persian-looking. Quite fair. We used to call him Modern Singh (or rather PC Ang did) because he did not wear a turban. Karam was soft-spoken but exuded an air of quiet confidence. He did worry about his OCS  training and took his lessons quite seriously. But he was game for anything when it came to fun and games. He was quite pally with Gerard because both liked to play pranks. Karam could pull a prank on you and keep a straight face. But the thing I liked about these two were how super helpful they were. You could call on them in a pinch and they would help you no matter what. Karam did not like violence and failed miserably in boxing. Like me both of them were later retained as OCS Mentor instructors. I am very sure cadet trainees under them enjoyed their OCS terms with these two wonderful gentlemen.

Willie was a tall strapping chap who liked to talk but was a bit naive. I blame it on his pious Christian unbringing. He has a curl of a lip that was unabashed about singing hymns all the time. He was the "Howdy-Doodle-Dandy" of the platoon, often strutting cheerfully about. He was also very helpful and his height and physical strength was an asset especially during mission time (like when evacuating casualty. He would often just volunteer himself to fireman lift the 'injured'. The bad thing was because of his size, PC Ang would also pick him as casualty so that we would all have a tough time evacuating someone large (same with Karam, actually)) and rugby. I remember him well because he and I boxed against one another. He was rather an undisciplined bull in the ring and I did not have much trouble outboxing him. It was nice the way he danced about but he was actually quite clueless about boxing strategies. I guess he was naive (and honest) like that. Of all the cadets, he was the most 'Rambo' about military training in dress and manner. There was certainly a lot of  boyishness in that young man.

Gerard, I've introduced him before as our platoon's resident joker and GSO (girl supply officer). He's the most outspoken chap and also the shortest. He had a Cheshire Cat smugness about him. He didn't like anything negative and would counter it with a "Eh, (like 'Wait one darn second...')" You could call him an eternal optimist. He was effective in that manner not perturbed by any failure, why I guess he was also successful in nabbing the girls. But I think it had more to do with his personality and him treating them as friends and equals. He certainly was not shy about talking them up as he demonstrated ably with the lady cadets from G Company when we came together for a function. If he didn't become a lawyer, it would have been such a waste!

Eddy was a section mate of Gerard and they both got on well. The two of them were about the same height and often got buddied together. They liked to talk but Eddy came across as more colloquial. You can say he looked more like a farmer's son with his tanned complexion and buckteeth. In a way, Eddy was more conversational and less smug. I remember him as the guy to go to for snacks and such (like kiam sern tee). He was the cheerful sort that took things as fated. He and I spent a weekend together in the barracks when both of us got 'signed extra' by our PC. When he walked about in his flipflops, he ambled along casually like an old man (plus he was skinny and stooped). He did come across as an old soul now that I think about it. He was also one of the chaps who liked to cook during our defence exercises. For some reason, Chan liked to hang about him. I think it was because of the wuxia novels. Eddie was knowledgeable about them. The few of us did have a Lantern Night party in a bunker on a mountain in Taiwan. Yup, it was during a major defence exercise (a.k.a trench dig-in).

Perhaps an even older soul would be Tong, who with Eddy and Gerard made up the three most outstanding short persons in the platoon. Tong was our conscience because he always spoke out against any unfairness or injustice in the platoon. He had an old raspy voice which he would lose on occasion. He and Eddy liked to converse (and complain) in Hokkien. They were bunkmates.

A person that mirrored Tong in outlook and manner was Danny, who was in my section and bunk. Danny proved himself excellent in admin and when he graduated from OCS, he was retained as the TCO for Delta Company. Danny was a very pious Buddhist and would make time to read his scriptures. He was badly bitten by sandflies in Brunei once and was scarred all over for a long time (I am not sure if it has even completely healed today. The itch inducing pesticides in the bites usually linger for many years.) It seemed Danny was particularly allergic to the bites. I caught him on Channel NewsAsia recently as their in-house analyst and commentator.

Probably the last person I want to mention in this section is Ling, who was skinny but had a paunch. He and I came through the same BMT Mad Dog Wee platoon and hence was also very fit. Despite his physique, he could run very well. He graduated from OCS with the Top Physical prize. Ling was an observant chap with a shy manner about him. But he had a super loud voice very ideal for commanding parades. He's a good chap and very helpful.

Well, these are just some of the interesting characters in this Platoon 10 of mine in OCS Delta Company. I will write more about the rest in another chapter. Looking back, I think my platoon had quite a few members who liked to talk or chat. Often, these were the fellas who did well and got retained as instructors in OCS upon graduation. But their chattiness, and humour, made the difference during that nine months of strenuous Cadet training. It helped to talk cock and sing song a bit. I mean, isn't that what Army life is all about when not holding a rifle and charging up a hill?