A Platoon of Characters II 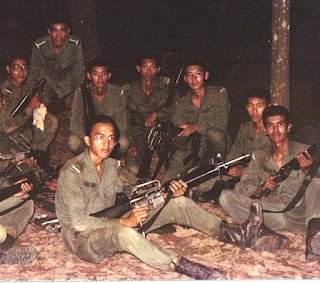 Besides those mentioned in the earlier blog, my platoon at Delta Company OCS had other interesting characters.

There was "jipun-kia" or Japanese kid. He wasn't Japanese but a Teochew chap who, with his wide Asian face, square jaw, slitty eyes and pencil-thin moustache, looked like one WWII Jap soldier. He even ran like one, you know, in a sort of upright way with little mid-rift motion. It had to do with his posture, which was arched with tummy out. He did look fierce, but was actually quite quiet and gentle. I remember him as being fastidious with cleanliness and his laundry.

I had three platoon mates who came to OCS with me from BMT. David and Kheng Hua, both from Echo Coy Platoon 17. Ian Chiak was from Echo Coy Platoon 20 (same barrack block in ITD). Ian Chiak was the sort of Hokkien-pai type who spoke his mind no matter what. He often spoke in a mixture of Hokkien, Chinese and English. I like guys like him because really, in life, it doesn't matter how you speak. It matters more what comes out of your mouth. If Ian Chiak was cussing, he was cussing with reason. He and I got on well because we were on the same wavelength on many things, at times unspoken. He laughed easily and liked to joke in his colloquial manner. Another trait we shared was a devil-may-care attitude. If we had to be gung-ho, we would. Ian Chiak knew I spoke English better, but it did not bother him. Instead, he would ask me for words he was keen to pick up. That's what I liked about folks like him. They are comfortable in their own skins.

Kheng Hua  wasn't tall but exuded a very calm presence...due in no small part to his large steady eyes, luminescent skin, and high forehead. If he wore a Buddhist priest's robes, you would think he had achieved nirvana or something. -That was how calm he looked! In person he was not hurried, did not not look for more things to do than was necessary and was contented to do well within his boundaries. But he was helpful and sociable nevertheless. He looked good in make-up too - something we found out during our OC Evening concert (a kind of "before Passing Out Parade (PoP)" event). He was one of the 'contestants' in a beauty pageant. I dunno, army fellas then liked to dress up as girls to perform in sketches, take part in beauty contests, etc. - probably to make up for the fact that there weren't any girls or women around in the first place. But why couldn't we have a sketch with normal guys in them? Or even a theatre-like stage play?

No one in my platoon can quite forget this fella called Mooi. He liked to sing Chinese opera and was one of those 'straight' persons who were clueless about what they were clueless about. This meant he sometimes asked very odd and obvious questions. If you were worldly and savvy, you would probably not like to hang around him. But Mooi had his own world view and was happy to be living in his own universe (with Chinese opera soundtrack). He was both strong and strong-willed and at times full of his own reasons, why I supposed he passed OCS even if he did not command well. (He once caught a big spider and kept it in a jar and said he is going to fight spiders with it. Strange.)

Adrian joined us from SAFINCOS before the start of Senior Term. His dark skin and often serious demeanour made him look fierce and unfriendly. He also spoke in a deadly monotone which gave the impression he didn't have anything interesting to say. But he was quite a colorful character who was more comfortable in his own Teochew dialect. He told us he was once a gangster - why he wasn't very expressive - but got over that troublesome phase of his life. He was hoping to join the army. I think he was rather filial to his mom and spoke of his family often.

Seah was another chap from SAFINCOS. He was more of the sergeant mould, ready to command people and get things done. He smiled easily and had a cheerful disposition. We got on well. Both Seah and Adrian were hands-on folks, which suited me fine. Sometimes you need folks like that around to get things done in a jiffy. Or solve on-site problems like during field camp. They were great pals to have when on overseas training and missions.

Adrian might be on the serious side but when he told stories, they cracked us up. Mostly they were oft-color ones but very funny. His dead pan look certainly helped. PC Ang also seemed to pick on him a bit more. But in his case, I think PC Ang meant well.

Chee (aka Johnny) was the artist in the platoon. I mean he could really sketch and draw. He and Bennett were the ones behind the production of our Delta Company batch book. The sections inside were overlaid with funny illustrations of our time in OCS, all drawn on translucent drafting paper. Chee was probably the most articulate chap in our midst and quite the philosopher. I'm more the practicalist and the both of us would engage in long discussions of various topics under the sun. Somehow, he reminded me of Alan Alda of TV's M*A*S*H in manner and gait. But Johnny had a more raspy and soft voice. When Johnny smiled, his eyes would disappear. He had a bit of a protruding lower lip which got badly bruised during boxing. His stooped posture and the rest of him certainly wasn't built for highly physical contact sports like boxing and rugby. Johnny was also rather the pacifist and often, I was tempted to call him "old man" because he was such an old soul too.