An Apple In OCS 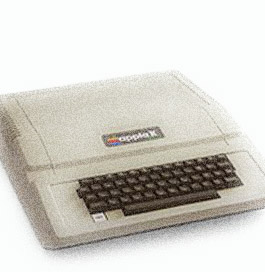 Learning about computers during my NS was something I certainly did not envisage upon enlistment. Nor did I imagine I would end up teaching about explosives as well.

The computer part I first encountered during my Infantry Pioneer training course at Gillman Camp. The School of Combat Engineer had an e-learning lab composed of Apple IIe computers.

These e-lessons were composed of mostly affirmative and calculative (math) exercises. They were very suitable for multiple choice tests as well. During lessons, we used the programs to help us calculate and optimize placement of explosive charges; acquaint ourselves with plant equipment specs (like the diggers and lifting cranes); bridgework: the calculation of span requirements, manpower and store; subject matter tests, etc.

These e-lessons on the Apple IIe machines were all designed using the Apple Turtle logo program and also in BASIC.

Lta Lin, our course commander, was also the hands-on chap, why we often saw him little during outside  fieldwork. He would be squirreled away in his lab/classroom tweaking programs and lessons. I think he much preferred that. He would later try to run his own computer firm. Lin was the quintessential engineer with the dispassionate and disembodied voice. Given his demeanor, he could well have been a preacher, no doubt putting a lot of parishioners to sleep with his sonorous voice.

When I returned to OCS as instructor after the course, life quickly settled into a routine. It basically followed a school timetable. Morning and afternoons would be punctuated with lessons. Sometimes these lessons involved weapons. We often knocked off 'work' at around 4.30pm, latest 5pm. Then it would be off to the squash courts. Squash was the in-thing then, as was snooker and jogging. It helped that our OC was a keen squash player.

When the cadets leave for overseas training, our time was even freer. It was during one of these days that we were introduced to the Apple II+, the compatible version of the Apple IIe. 'Compatible' to mean pirated.

It all began innocently enough. It was during a live-firing session at the Demo(lition) range in Pasir Laba. Fong (my fellow team officer and 2 I/C) and I were chatting with Liu, a Mentor officer from Alpha company.  Our conversation somehow veered into the topic of computers and how it was becoming popular. Liu then asked if we were interested to see one. (I had thought Liu's family ran an electronics component shop in People's Park Center (the Sim Lim Square of its day), but actually, he was just being entrepreneurial. He had access to some computers via a supplier.)

Being engineers (I was to study that in the local uni; Fong was going into Biology), we were naturally piqued. Besides, the two new officers who had just joined our Demo Team were Mechanical graduates from SP (Singapore Polytechnic). They were even more interested and savvy (as I would find out later).

So one afternoon, Liu brought his Apple II+ computer to our office, a corner one located on the Golf Company (female cadet) premises. It looked exactly like the Apple IIe, perhaps a shade lighter in beige (it was after all a compatible). There was even a tin plate at the front to say Apple II+. We would later replace that with the more authentic rainbow-banded Apple logo. That logo was such a cherished item at the time, like the Mercedes car 3-pointed star people would break off to keep.

Liu removed the top cover to show us the insides. The cover was a little difficult to dislodge and needed the right technique. A gentle thump of the palm was it.

Inside the Apple II+ was a large PCB board. On the left a power supply, at the back some slots for expansion cards, at the center the motherlode 6502 processor chip - the brains of the machine. That's the first time I was looking inside a computer and it was rather underwhelming. I had expected more bells and whistles - more shiny bits even. But I was very curious how all those components linked up to do what it did.

Liu then showed us a trick. "You see," he said. "This is even better than the original." He then proceeded to short out one of the resistors located dead centre on the motherboard (i.e. the PCB). Afterwards, the sound from the machine's speaker became very loud. "See, your games will never be the same again," Liu grinned as he said that.

Perhaps that's the reason why music from Broderbund's '80s most famous games like Lode Runner and Choplifter still echos residual in my head today!

As I would learn later during my Engineering course, what Liu did was to remove a voltage limiting resistor from the circuit leading to the speaker. It's a simple trick that does no lasting damage to the machine.

Fong, who was observing all this while, asked: "So, how much is this going to cost us?"

$700 was the figure. "This is one of the best compatible in the market. My family won't sell anything of less quality," added Liu. $700 was a lot of money in those days. Much more if you were an NS man struggling with just $99 a month.

Truth be said, Lim could be dressing up a Hyundai for a Jaguar for all we know. But he was a likeable fella with bright eyes and an easy confident manner. This fella would go places some day, was my assessment at the time. And he did, doing stints in IT software development and process-change management at major MNCs. He was actually a guy who could be trusted (or someone who inspired trust).

Fong and I then decided to share to buy one. We weren't all that hard-up about a computer but Fong was thinking of taking a computer language course as a practical aside. He would later go on to study Cobol part-time. Cobol then was the default programming language in the business world. For scientists and engineers, it was Fortran and Pascal. Speaking these ancient names now makes them sound positively medieval, like some long-dead artist. That's how fast (and much) the computer industry has moved on. We now do not talk about programming languages but apps. Apple or Android. In any case, most software programmers use C++. (I even learned something called Turbo C)

In the subsequent days that followed, we spent whatever free time we had learning more about this plasticky machine called the Apple II+. We learnt to connect it up to a green screen monitor, two 5 1/4-inch floppy drives and a joystick. From that day on, we also tried to get our hands on whatever computer magazines were available.

Most popular were the ones that dealt with Apple BASIC. I especially liked the magazines that ran economical programming code contests - the two-liner ones.

It's incredible to watch when such programs run. The complex stuff they do on screen was like some mind-steam (erection). And oh, did I mention that back then, the onboard memory of such pioneering home computers was only 64KB. Not 1 MB or 2GB. Other brands had less, like 48KB.

The other two junior officers, Richard and William (who would take over our duties once we RODed) were more savvy. Richard even bought his own ZX Spectrum 8-bit computer, a slim machine with rubber keys that was produced by UK's Sinclair Research. It was positively svelte and futuristic. The Spectrum became very popular and had many games programmed for it. We would load (and save) these games via a cassette tape recorder. A game took some minutes to load and would make screeching/grating sounds much like how data modems would sound like later in the 90s when loading up. The Commodore 64 and BBC Micro all behaved the same.

Richard later learned graphics programming on his own with his Spectrum. All that pixel counting and machine assembly language coding. I was more interested in using the computer to control stuff like in automation or weather sensing (which I later implemented using an IBM XT PC). And play games.

Oh, what games we played in that Demo Team office with these computers. Lode Runner, Choplifter, Zork, Space Invaders, Brick, Karateka, etc, were the more popular titles. Many times, these games were played with Air Supply songs in the background. We were like four kids with new toys! Yup, those were indeed very enjoyable times in that Demo office in OCS during the 80s. Right up to the day Fong and I RODed!

[Here's a to-buy list from the 80s that I unearthed recently from a box of nostalgia docs (see pix below): 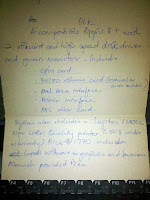