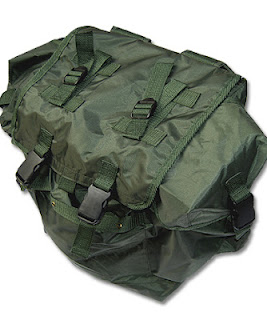 The new OCS (i.e. SAFTI Military Institute) is something, isn't it? It's  open and sprawling and get this, no fencing.

Back at Pasir Laba SAFTI in the 80s, we had to pass by a guardhouse each time we wanted to enter. We had to show our 11Bs as proof of identity, have our bags searched. For those not familiar with the Army, the 11B was our green IC. We would only get back our pink IC upon ROD, leaving National Service.

But after 9/11, this new OCS campus was not so easy-access after all. Some areas became out of bounds and ground patrols were increased. More electronic eyes were visible too, especially in the carparks. Not surprising since such e-eyes are getting cheaper by the minute and the software behind them more sophisticated. Forget motion-detect, that's basic. The buzzword now is threat analysis. Dropped your keys under the car? The system will automatically flag you as a probable bomb planter.

With such a sprawling and impressive military instititute, I am wondering, what life is like as a cadet today. I guess it would be pretty much the same as mine was in the 80s. In-out, no time to really enjoy the bunk, let alone the facilities available.

I was reading a thread entitled 'OCS FAQ' from an Internet forum the other day and was amused that not much has changed in terms of what cadets are equipping themselves for life in the OCS barracks. Even the jokes are the same!

Here's the list, with the poser's original comments in brackets [square ones are mine]:

1. Lots of black tape
2. Perm marker
3. Lots of black string (for securing loose items)
4. Clear tape (the very broad kind) [Duct tape?]
5. Masking tape
6. Ziploc
7. Jackknife
8. Pen, pencil, paper
9. Telt (wrapping paper) [Talc?]
10. Febreeze - a spray that removes odour from clothing - good when u need to re-wear no. 4 cos no time to wash!
11. Black rubber bands big and small
12. Materials for cleaning bunk and area.
13. Iron (yes, I brought my own iron in)
14. Starch (the spray kind)
15. Lots of hangers - the ones chosen as the standard kind for the platoon
16. Lighter (to burn cock hair)
17. Kiwi and brush - accessible at all times!
18. Tupperware - I use it to keep the aide memoir in my SBO - we were told to bring the aide memoir wherever we go.
19. Spare batteries

No.1: Black tape struck a cord in me. It was understandable back in my day. Our equipment were mostly leftovers from WWII. Brass was the military grade metal then. Sure, it doesn't rust but neither was it strong. The hooks and buckles don't work, so we had to black tape them up to make sure our SBO don't fall apart. Also, brass reflects light at night. The black tape (and black marker) helped to conceal their existence. Our trainers also disliked dangly bits, so we would roll excess strap-ends up and secure them up. How my Amah might roll up her hair in a bun and wrap it up in black tape.

Black tape was basically our scotch tape for afixing anything. In real life, it was actually electrical tape. It helped one time to even prevent one poor sod in our bunk from being electrocuted by our overused China-made iron.

No.5: The other useful tape was masking tape. Without this, our talc (clear plastic) wrapped maps would fall apart. It worked better than scotch tape because it was easier to peel and restick. We could also write with pens on it, like this map belonged to 'PL 10'. It was useful like that so if a map was found, we would kow who to extort 1206 money from (80% mark-down was the rate).

No.4: In my NS time, duct tape was something the professional car mechanics used, not found in every household. Like everything else, the influx of cheap China goods meant our households can now be equipped with anything from WD40 to star-shaped head screwdrives.

No.2: With so many similar-looking botak heads in the same platoon, identifying who is who can be a problem. That was my experience during BMT. A black perm (for permanent, not hair treatment) marker was essential to write your name on everything....short of the toilet roll.

No.3: The black string we used was the same kind temples used to give out with their Buddha pendants. It was ideal as it was slight stretchy and strong. It was also kind to the skin. We used it with our dogtags (sorry, our commanders hated that term) and also to secure anything we did not want dropped, like our bayonet, compass, map...especially stuff that we would take out now and then to use. It served the same purpose as keychain cords security guards like to use.

No.6: Ziploc bags was just getting to be more common-use during my time. Still, a simple clear polystyrene bag would suffice. We also recycled those white medicinal pill zip bags. They were especially useful for keeping money notes dry and some loose change. You never know when a street food vendor might turn up with some hot coffee or noodles.

No.7: A jackknife is a pocketknife. Jack is not Jill's partner; it just means spring-hinged. I've always wondered about the SAF-issued one: It is all shiny and made of stainless steel. Compared to the Swiss Army knife, it's positively simple. A blade and can opener is all it has. But it's heavy. I wished they had given us a lighter one. Really, a jackknife with a spoon and fork as well would be better. Maybe even a scissor function. Or compass. The list grows. In camp, we boys all hankered after a complicated Swiss Army knife. Not that we had any particular use for it. Somehow,owning one was 'cool'.

No.9: I used more talc (clear plastic sheet, not powder) in OCS than my entire school life. Who knew you needed them like tampons when the occassion called for them? Maps can't go without them just like how some panties cannot during some exercises.

No: 10: Febreeze? Man, during my time, all we had was foot powder or talcum that we'd bring from home. Prickly heat powder was the best. For a touch of class, we used lavendar scented onces. For feet, army powder win hands down. Seriously, they were very good.

No.11: We needed these to secure our aluminium mugs to its holding pouch. Also the smoke grenade to our SBO. We needed the larger one for our helmet to keep vegetation on inorder to remain hidden like a chameleon in the jungle. A small band was always needed keep the bayonet dagger in its sheath. Body powder kept these bands supple and sticking to one another in our warm weather.

No.13: No, we didn't need to bring our own iron. Each bunk shared their own. The shiny stainless steel one from China was the best. It's still being sold; and still just as simple. We would keep a candle to make sure its surface remained waxy smooth. Another popular brand was Panasonic from Japan. Both were capable of heavy duty use. But most liked the China-made one for its weight (which was very useful with starched uniforms).

No.14: The above list was compiled not long ago, so I'm surprised that starch spray made it to the list. We started using starch spray when it became available in the early 80s, first via our camp's 'Giftshop', and later at the Chinese emporiums. Ok, a starch spray does help make even an ordinary shirt look stuck-up.

No.16: Haha...we all had a lighter each but not to burn cock hair with. (It's an old joke, btw) The lighter was needed to light candles with (which was a standard fullpack item) and also solid fuel to cook with. As for cock hair, it helps to trim, not shave. Someone did just that and had itchy pubics for a couple of weeks. Haha...it was terribly embarassing for him. Yes, burn any trimmed cock hair. It was rumoured during our time that people could make black magic with it. I rather just toss it into the wind.

No.18: Tupperware is a bit 'atas' and 'mahal' (Malay for branded and expensive). Any plastic container will do. I'd used one to keep first-aid and a sewing kit dry. Another to keep snacks and other sundry what-nots (like Mopiko). Diarrhea was always a concern during my time. Back then the remedies available were mostly TCM types: a miniature plastic bottle of 'tho orh san' (brownish powder) or 'po chai yun' (black pills kept in waxed balls). If you had diarrhea, the common medicine from the clinic was some thick chalk-like white liquid as unpleasant as Fishermen's fish oil. These days you get a grey-green capsule (Loperamide) and it works like magic.

With shops like Daiso around, one can buy very small 'Tupperwars' for keeping something like an aide memoir dry in the breast pocket. (An aide memoir is basically a quick fact-checker, like if you had forgotten the steps to giving an Ops Order) or what to do if an enemy starts shooting at you. Page 23: "1. Take cover." Oops, too late.

What's missing from this list are the aluminiun tent pegs we would bring along for field camp. Since we always lose one or two each time, having spares in the bunk is useful. The other thing is body powder. Prickly powder is a tradtional favourite. My platoon mate Chew from my BMT days would powder himself down excessively after each shower. He would look like some dough ready for deep-frying. I guess some habits from home take time to get over!

No.19: Spare batteries are not just for the personal music player or torchlight. With modern warefare, batteries are essential, especially when soldiers are equipped with netcentric devices such as PDAs, GPS and AR (augmented reality) devices. But heck, such equipment can take as many as eight AAA batts each. The weight does add up. Thankfully, there are many chemical batteries around. They are powerful when activated and can provide electrical juice for far longer and stronger than even the best rechargeables from 7-Eleven stores. The best part is that they come in powder form. Just add water. In the future, a soldier's helmet will also act a solar panel, not to mention his poncho (raincoat). Do you know the surface area afforded by a poncho? It's huge in solar energy terms.

What modern thing would a cadet need these days?

Me? I would bring a e-reader. If I am the head of OCS, I'll make sure every cadet gets one. I'll load it up with all sorts of useful first-account war stories from WWII, Vietnam War, Korean War and the recent Middle-East ones. It'll teach as well as get everyone in the right mindset. And of course, all back issues of Modesty Blaise for entertainment reading. This comic book (and novel) title is more than just about a female spy and gang leader. It's about being combat smart and psychologically strong. Women, as they often do, show the way. There's a lot to learn from the stories. And who can resist a spy-spy kind of story?