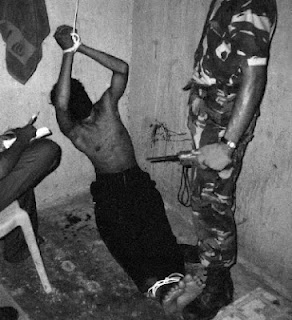 During my time in OCS in the early 80s, there was such a lesson called Evade and Capture, a POW lesson. I don't remember much of it except that we had to mount a mission to rescue a captured comrade. We failed miserably. I don't know if it was because we were inept or that the mission itself was planned that way. I mean, how could you succeed if your adversary knew you were coming? Or that the inmate was secured in a guarded POW camp. How to clobber a guard to get to him? We were after all NS men in disguise. Maybe if they had used Boon Lay gangsters as the Red Force (enemy), maybe we wouldn't mind clobbering a few!

Oh, there's a torture part to E&C. To us, it was always an accident waiting to happen. In fact, a high-profile incident did happen. A cadet was hung up from the ceiling for far too long. Another case involved holding down a cadet's face into a barrel of water way until he almost choked.

These acts by themselves were not terribly bad acts of torture. But when done to cadets, it was like a teacher slamming a kid into a wall. (I've seen that happen, carried out by a decorated teacher no less. Yes, kids can get on one's nerves. But restrain is one thing we adults need to demonstrate to the younger ones around us.)

But that's the thing about "simulated torture" - both parties do not know how far to go. The one who plays POW wouldn't know how much he should resist. The one playing the torturer obviously wants to inflict more suffering to "make it real". But how real is real?

Here-in lies the rub. I feel simulated torture is more voyeuristic in intent than real instruction. The trainer just want to see how far you can go with torture. But, what exactly is the passing grade? And to whose standards? I think these are valid questions that course planners need to ask - and conscientiously ask and demand answers to - before setting out to do something. Torture is not something done and then to say "Sorry, we erred".

I also feel the focus should not be on how much torture a POW can endure but more on the kind of strategies he/she should aptly apply if captured. There are tricks to inure the mind and spirit against such cruel and intentional abuse. Sad to say, I did not get any such enlightenment during my time in OCS. I was taught to say only my name and serial number, like some kindergarten kid.

Look, if you have to give information to a captor, in what form should it take? And what if they torture your comrade to get you to 'talk', then what? Are you to submit totally or simply ignore the suffering of the other poor sod? (Research has shown that torturing another person is the most effective way to get the co-operation of another.)

In such a pressuring situation, how can you begin to negotiate for your safety as well as your comrade's? How can one define the psychological profile of such a captor/torturer?

There are many situations and issues to consider when one is captured. For example, what is your right as a POW under international law? Is the opposing army even party to this treaty at all and has respect for its values and rules?

I wonder if our army is prepared for this kind of information dissemination in the event of war. Certainly, it is good to know. Remember the British in Singapore surrendering to the Japanese during WWII? I am sure none expected the kind of harsh treatment they eventually received as POWs. The Burma-Thai Death Railway construction, for example, where as many as 16,000 allied POWs perished. If they had known that the Japanese Army were treating their POWs like slaves, wouldn't it have been better to go out in a blaze of glory than surrender?

The Bataan Death March is another example to consider, where hundreds of officers and NCOs were summarily executed immediately after surrender. Yes, it was a tactic to cut off leadership among the POWs. But it was still a cruel act.

Besides, can 'forced confessions' be used as a tactic to deceive rather than surrender?

So, in a lesson such as Evade and Capture, we had many questions to ask just as there were many answers to deliberate upon. What's the game plan now in our current SAF? I wonder.

Previous story: Platoon of Characters II; Next story: An Apple in OCS
Posted by TC Lai at 10:24 PM