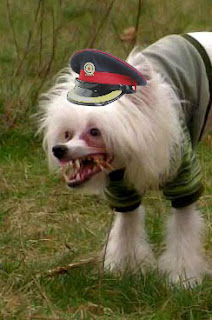 When training soldiers, there is a fine line between training them for toughness and training them for fitness. If you want them to be tough, there are the Ranger or Pathfinder courses. A ranger or pathfinder can survive any combat situation, especially if left stranded in enemy territory or that area between two hostile forces called the No Man's Land (aka DMZ or demilitarized zone). Rambo in that First Blood movie was a Ranger.

If you want to train a soldier to be fit, send him to PTI school where  physical training instructors are educated and trained.

Our dear Mad Dog platoon commander seemed to have the two confused, or mixed up more likely, why we of Platoon 17 were needlessly pushed beyond our limits. We found out his intention later, when he told us his objective was to prepare ALL OF US for OCS (Officer Cadet School). The thing is, not everyone was of officer material.

Mad Dog and his corporals and sergeant conspired to tweak our BMT training in such a manner that we were both mentally and physically stretched. We knew because recruits in various companies tended to compare notes, especially between ex-JC mates. The other companies/platoons did the bare minimum. The reason was that the SAF was trying to change. They wanted to be a kinder, gentler NS provider, more attuned to the needs of its men. Perhaps complaints from parents of my brother's tough-going cohort had finally gotten through to the authorities. Or perhaps the incidence of in-camp suicides was starting to mount. In any case, my batch of recruits was to be treated with kid gloves. But apparently our Mad Dog PC did not get the memo.

He made us run farther, did more calisthenics and had prolonged sessions of combat training. We had less time than the rest for lunch in the cookhouse even. We endured old-style military harassment that by right, should have been outlawed. One of these involved carting a metal cupboard from our barracks to the centre of the parade square all because there was some imaginary dirt inside.

Physical abuse was inflicted upon us through making us leopard crawl (crawling on our bellies) in our PT attire across an entire field. He didn't care that the field was filled with mimosa or were bare in patches. We ended up with bleeding at the knees and elbows.

He made us fireman-lift our buddies (i.e. across the shoulders) round that long and circuitous camp road. Many collapsed before they could reach the final stretch - a 30-degree slope - that made finishing the course even more improbable. A fellow recruit's back problem was aggravated because of this. But Mad Dog did not care. He simply assumed the worst of him, that he was "keng-ing", i.e. pretending to be sick.

We checked with our friends in the other companies. NONE of them did what we did.

On other occasions, we were harassed whilst doing the standard obstacle course or SOC. We had to repeat and repeat the whole thing if someone failed to do one obstacle satisfactorily - from the low wall all the way to the barbed wire jump. On many occasions, we returned to the SOC in slacks and tee. Maybe Mad Dog's intention was to have all of us ace the course. But were we really that slow?

At other times, when we were at one of the firing ranges at Pasir Lebar SAFTI camp, he would take us on a run to Peng Kang Hill, which was famous as a locale for making grown men cry. It's a steep hill with a bald patch strewn with gravel. Already slippery and difficult to run up in PT attire, the slope was doubly, if not tripley difficult when in full battle order. Because many soldiers slipped and injured themselves (and sadistic platoon commanders liked to punish their men on it), Peng Kang Hill was actually banned for such exercises. But Mad Dog did not care. I can understand the tourism and nostalgic value of the Hill, but to make us do it more than once was just being mean.

I am all for tough training, but there has to be a reason for it. And it is no substitute for building up fitness. When you train a soldier to be tough, it is more a psychological thing. And not all of us got into BMT on the same level of fitness; the same can be said for psychological toughness.

On other occasions, Mad Dog's actions were retributive. When something was not up to par, he would prolong the exercise. It came often during combat training (see previous blog). It also often happened just before lunch time. Mad Dog, in his tantrum, would forbid us to spend more than 10 minutes in the cookhouse.  With just 10 minutes to collect your tray, queue up, get food, eat, wash your tray, return it to the rack, we often had to gobble it all down. And he would station his corporals along the way to make sure none of us skipped the meal.

I think denying an NS man his meal is one of the worst thing an officer can do. If you ask your men to give their all during training, at least have the courtesy to let them enjoy a meal and fill their stomachs. ITD was not a concentration camp.

Yet on other occasions, our platoon sergeant would order us to descend from our barracks in the middle of the night (while we were sleeping) to lay out items from our fullpacks in the parade square. If it was unsatisfactory, we would have to pack up, unpack the items on our beds, repack on command again and run down to the parade square again.

Up to this point, you might think I am a complaining soldier. But the thing is, none of the other platoons in ITD at the time had to go through such harassment.

The reason Mad Dog gave us was that he wanted us all to be fit for OCS. If BMT was this bad, think how bad OCS must be. That's how some of my fellow recruits thought.

When OCS officers finally came round to conduct their assessment exercises to determine who was suitable for officer training, many of my mates opted out, even those I thought would make stellar officers. For them, NS was just a two-year thing, why push so hard or subject yourself to such cruel and unusual punishment?

My own drive was to become a better officer than Mad Dog and those who had no respect for their fellow men. NS training was essential. It's officers like Mad Dog who give it a bad name. There was another officer in Echo company (a short fella) who also gave SAF officers a bad name. He was worst than Mad Dog because he came across as amoral. At least Mad Dog was driven by his OCS goal. This other officer took perverse pleasure in "tekkaning" some of the recruits.

If such a person could be an officer, I thought I could definitely be a better one. So I set my sights on being an officer and tried my best during the assessment trials.

In the end, what Mad Dog set out to do, it all backfired on him. One by one, my recruit mates told the OCS recruiters, "No, we do not want to take part in these trials." Mad Dog was left flummoxed. In fact, he held a meeting to find out why and to persuade some of them to change their minds. None of them did. It would reflect badly on his record.

Basically, Mad Dog forgot the most rudimentary principle of military leadership: Men must want to follow you to their death. With Mad Dog, we wouldn't mind "blanket partying" him instead. He could go and be "saio on" all he wanted on his own. I think we could have trained ourselves better. My personal motto has always been: Be a good soldier, but be an even better comrade.

There was one occasion when Mad Dog Wee showed his good side. The final IPPT (the standard army fitness test) was on the next day. I could ace all my other stations that involved shutter run, chin-ups, sit-ups and standing broad jump. But when it came to running, I was always just short of the gold standard (which few could do). The next morning, when he saw me in those China-man black shoes issued by the Army, he asked if I had not a better pair of running shoes. I said no. Actually the reason was that I was into badminton all my life and did all my running/training in badminton shoes. Mad Dog then asked me for my shoe size and told me to wait. He mumbled something about me not being able to do well in those shoes and off he went. Five, ten minutes later, he was back holding a pair of jogging shoes. Use these, he said. I tried them on. They fitted.

That day, I ran a different test race. My strides were longer and my feet did not feel as hot. The China-man shoes were notorious for their lack of cushioning and arch support. We often joked it was a shoe for amahs than foot soldiers. And they made a "plop-plop" sound each time we ran.

Mad Dog was naturally there with his stopwatch at the finish line. He was beaming with satisfaction. I had achieved gold in just the nick of time. I took off the shoes and handed them back to him. I said my grateful thanks.

Mad Dog just pulled his mouth into that wicked grin of his. I could not tell if he was happy for me or with himself. With Mad Dog, one never knew. His eyes were single-lidded, half-closed giving him a poker-faced look. They never really opened up even when he laughed, which always sounded like a sneer. It would seem that everything was a private joke with him.

Mad Dog's methods might have been extreme, but when we arrived at OCS, those of us from his platoon found the training a breeze. We could "switch off" even. And it did not come as a surprise that one of us emerged as the best cadet for Physical Fitness. It was not me, but Ling, a skinny guy with a congenital little beer belly. Till this day, he wonders why I gave up my BCPF contest slot to him. I have had enough of exercise machismo... no thanks to Mad Dog Wee.

Related stories: Tough Cadet Training and A Platoon of Characters
Next story: Pool of Courage
Posted by TC Lai at 9:31 AM