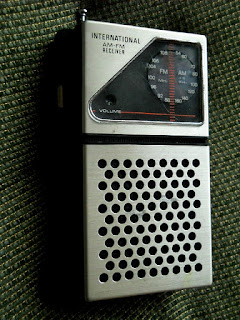 It was standard practice back then to have a compulsory two-week stay-in-camp at the start of BMT. But if you were enlisted in December, that rule can appear rather farcical. Four days after enlistment, I found myself at home for Christmas. A few more days later, it was New Year's. A month later, it was Chinese New Year. So, for those who are a Mama's Boy being enlisted in December is not such a bad thing!

BMT was supposed to teach army newbies basic infantry craft. For us recent school leavers, the first two weeks were mostly spent being exercised and regimented. Exercise began early in the morning at 5.30 am. It was called 5BX. It was called that because it consisted precisely of five basic exercises: the Star Jump, Running on the Spot, Sit-ups, Push-ups, and a Jog. We would assemble at the parade square and under the dim spotlights that hung from the barracks, loosened up and stretched. We then did our 5BX followed by a run. The runs were usually interspersed with more calisthenics like side running (crab) and more push-ups.

The other formal exercises during BMT involved swimming and combat training - which had less to do with combat than have your muscles stretched to the limit. One move in particular involved the M16 rifle aka Your Wife. We soon found out that a person can do all sorts of exercises with The Wife - all requiring exertion, grunting and mostly regret. Hey, all that sounds rather bedroom familiar!

One exercise involved holding The Wife at arm's length and remaining steady for like 10 mins. An empty M16 rifle weighs 3.3 kg. That's roughly 1.5 times the weight of a two-litre bottle of Coke. Heavy? You bet. After a while, it will feel like lead.

And what if you have to do that after jogging 5 km and completing numerous sit-ups and leopard crawls. Or after a long session of treading water in the pool?

Yes, our platoon commander, sergeant and corporals were sadistic like that. After a while, they made us dread combat training. The only real combat training we did was learn to fight close quarters hand-to-hand with our rifles and bayonets (i.e. knives attached to rifles). Sometimes we would put our bayonets on and charge at stuffed-up dummies that pretend to be our enemy soldiers. The first time we did that, I recalled reading about Singaporean women and children being bayoneted in such fashion by Japanese troops during WWII. I realised you don't really have to do very much to spill someone guts out.

Of course, all that slinging and slanging about with butt-hard rifles and pointed bayonets resulted in injuries. Quite a few of us ended up with badly bruised knuckles and fingers and cut arms. At times we got knocked on the head.

Quite a number of chaps actually cried or collapsed because of such tough training - especially when holding The Wife out at arm's length. When that happened, the whole exercise would be repeated again for another 10 minutes. Our sergeant and corporals turned it into a blame game. It became Psychological War.

About dropping The Wife: It's a cardinal sin in the army. Do not drop your rifle anywhere, not during training, not in the field, not in the bunk. If a corporal sees you do that, it is an automatic Drop 50 (fifty push-ups on the spot).

I was skinny, so this particular Hold-The-Wife-At-Arms-Length exercise was tough on my limbs. But I had been through tough badminton training before so I could try my best to bear and grin with it. That's how I got through my tough training days. By sheer will-power (and no small amount of self-hypnosis!)

We all hated that combat training. The good outcome was that it served to bond us together against our corporals, sergeant and that mad-dog platoon commander of ours.

His name was Ernest Wee. Physically, he was lean and tall and walked with a slight hunch. He had a mop of straight hair that swept from left to right. His eyes were beady. His most distinctive feature of all was his squarish jaw  that jutted out in a "sibeh how lian" manner. It also made him look as if he was unhappy always in a jeering mood. Added to that ensemble was a small moustache that flashed above a pair of thin lips, making him look more like a real "mean son-of-a-bitch". He looked much older than his 20-something NS years.

At first I had much respect for him. He spoke well and was very confident for his age. I thought he was a career officer, but no. He was doing NS like the rest of us. When he became unreasonable with his exercise demands that's when I thought perhaps he was overdoing it a bit. I was very fit then so I could bear with whatever he threw my way. But not everyone in my platoon was like that. One even had a doc-certified back problem. Mad Dog simply ignored it. More about him later.

In that first two weeks, we learnt more about routine life in camp. After breakfast every morning we performed area cleaning. Each section took turns to sweep the bunks, wash the toilets, clean the glass window louvers or pick leaves and sweep the staircases in the general areas around the barracks. We learnt to eat at the cookhouse, where to pick up the stainless steel trays, get our food, sit down and eat, dispose of unfinished food, clean/dry and replace those stainless steel trays for the next round of hungry recruits.

In the evenings, depending on the time we finished with training, we would get a bread bun (with red bean or coconut filling) or red/green bean soup. For the latter we would have to use our own green plastic mugs, forks and spoons. Those drinking mugs also doubled as our brush-teeth mugs as well.

Then there were the armskote procedures that governed how we took out and returned our firearms (i.e. M16 rifles). Our rifles were taken out every morning to be cleaned and prepped ready for use during the day. When training ended, we would have to clean the rifles (outside and inside), polish that leatherised butt with kiwi and have it for inspection before getting it accepted and returned to the armskote. If you didn't do a good job, your rifle would be rejected and you would have to clean it again. This might hold up the whole platoon - something no one wanted to be accused of, especially during book-out time. The person most mad about this was the camp duty officer or DO, who would rather have an early night than wait for a bunch of blur recruits forgetting how to clean a rifle properly. You see, before we retired for the night, the DO had to "clear" the armskote, meaning he would have to certify that all the rifles had been returned and chained properly to their resting stocks. There would be major trouble if one went missing during a surprise inspection from HQ.

Of all things an officer want is to avoid losing a weapon on his watch. That's like throwing one's military career out the window, no matter how NS or career-signed-on brief that might be. Or that career could simply come to a "henta-kaki" (which is Malay for marching on the spot, i.e. going nowhere). A DO, of course, had other things to do such as making sure that things at the cookhouse was in order or that the meals for late-returning soldiers were prepared or delivered. Cooks would often treat DOs well and cook up nice supper dishes for them, dishes such as fried rice or mee goreng which were not your standard army menu items. Such special DO treatment became a kind of a tradition in camps all over the SAF.

I think the two biggest adjustments anybody has to make going into BMT are the waking up/sleeping and bowel habits.

When I was born, I slept through most of the morning and day; it became my habit. I am what people might call a "night person". I didn't like waking up early and would only go to sleep pretty late. For better or worse, that's my natural circadian cycle. But life routines, as we know, can be changed and adapted. So the early rise/late night sleeping in camp was not much of a problem for me. It helped that as a student, I often had to wake up at 5.30 am to make my way to my junior college near Toa Payoh - just so to get there on time. That's the price I had to pay for my family suddenly moving all the way up to Singapore's ulu North.

As for bowel movements, that took a big adjustment. Up till that moment, I had been trained by my parents to do my business early in the morning and be done with it. It became clockwork. But BMT with its extra early morning wake-up calls, 5BX and breakfast afterwards, gave a shock to my system. Besides, everybody had to do their business before the toilets were cleaned, which meant extra pressure to perform. It took a while before some of us started to adjust and go to the toilets at night, which was the better bowel removal time table (unless you were on night topography or some other night training). Yes, I was tight-assed for a while but eventually was very relieved to be able to get over that kind of strict bowel regime. The Life Lesson is: Give and take. Or was it eat and let go anytime? Haha....

When the two weeks of compulsory confinement came to an end, my family came to visit me. I was particularly touched when my eldest sister presented me with a transistor radio (see pix above) that could also receive TV channels (some of us still hankered for the HK dramas over Ch 8). Till today, it still works. TV was not allowed in the bunks and it was only through radio that we were connected to the outside world. The Sony Walkman was new then and not everyone could afford one. The best was to have a small radio and a ear plug to listen to music and the news whilst relaxing on a bunk bed.

If you had wanted to watch TV, you could do that at the commercial canteen. Each camp had one such makan place. That canteen was a refuge for guys who could not "tahan" army food. There were coin phones too in the canteen for guys to call home or chat-up their girlfriends. At ITD Sembawang, I recall each barrack having a public phone at each end of the block. Queues would form there, esp before booking out!

I seldom went to the canteen. It's a sinkhole for your money as well as morale. Not being able to stomach army food was not a good thing. Yes, the beehoon felt like 'barb wire'; the veggie was yellow and tasted like diesel rags... but there were bright moments too. And as a recruit you have to eat to survive the tough exercise regime. Being picky about food is not very smart. Besides, at each table in the cookhouse was a jar of sweet-sour plum sauce that looked like yellow marmalade. Put that on your rice and meats and you can imagine yourself eating at some fancy Teochew restaurant! Well, if only Mad Dog gave us enough time for that even. At times, we were given just 10 minutes to enter and exit the cookhouse altogether. If the queue was long, that got cut to a meaningless 5 mins.

So, as the two weeks passed, we slowly began to sample Mad Dog's sadistic intent. He had a reason and a method to it all. But it would later backfire on him.