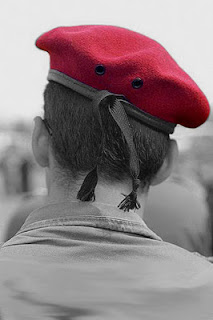 One month had passed and we were now bona-fide recruits. We had become comfortable with our 'durian' hair, ill-fitting shorts and also mastered the art of going to the toilet and sleeping anywhere.

More importantly we had begun to look forward to weekends when life and the food wasn't as tough to swallow.

But booking out for the weekend was still not that straightforward. We often had to mill around until everything is given the all clear before we can even attempt to march to the gate. One time, it was a false alarm, and we had to "ke blakang pusing" back to the barracks, all because someone had forgotten to return a blank attachment to the armskote. Some "blur sotong" had left it in his cupboard. A blank attachment is what you attach to an M16 rifle barrel in order to fire blanks with. It's basically a screw-knob with a pin hole. Very insignificant in the grand scheme of things... but not on this occasion.

You really only know you have left camp when your backside finally kisses the Main Gate goodbye.

In this one month, my section had gotten to know our commando corporal pretty well. ('Well' is relative because corporals don't get very close to their recruits in BMT. It's normal that masters typically don't hang out with the slaves unless it is to beat them up or sell them to the next highest bidder. I know because I had watched Kunta Kinte in each episode of Roots.) But Cpl Raja was rather different.

The other two corporals were Chinese. One was particularly mean (let's call him Wong). Wong had a very "kwai lan" face... someone who would be tops on everybody's 'Blanket Party' list. The other fella (Tan) was ok, just a follower. In time, my section became glad to have Cpl Raja over the other two. That saying about commandos being a bit "siao" in the head is true. Cpl Raja couldn't care less about "Going by the book". He often scratched his head about our training syllabus and liked to teach us off-the-cuff. And he would spice things up with his jokes. Cpl Raja provided us with much relief against all that tough training demanded by our Mad Dog PC. Although fun to be with, Cpl Raja also knew how to 'play along' whenever ranking staff was around. He didn't want to spoil things for us.

At first we thought he, being a Commando, would be "siao on". But he has been more like a retired soldier. I think it had something to do with his knees - why he couldn't be an active Commando anymore. Maybe that has given him a new perspective on Life.

Many of his stories were shared while leading us out on Field Craft, which after the main lecture, each platoon section would normally fan out to practice on their own. That's when we would have private time with him.

During a session on Camouflage, I remember him telling us about those deadly concealed Panji traps that wounded a lot of US servicemen during Vietnam War. Another culprit were the Claymore mines. He said in Jungle Warfare, you have to be alert at all times or else nasty things would happen to you. We started to take his word seriously and would walk with great care. Being novices, we walked more like we were doing Tai Chi, which was quite hilarious!

On another occasion, he taught us or rather related to us, how the Special Forces survived in the jungle.

Cpl Raja liked to carry a small buck knife with him on his SBO (I think it's a habit with all commandos) which he would use to whittle twigs, etc., whilst waiting for us to complete our tasks. He would also wear a camouflage netted scarf, something the other corporals copied. Besides being cosmetic, that scarf was actually rather useful for dipping into streams or being used as a mosquito net (for the face). Or just to look Ranger gung-ho!

A major part of Field Craft lesson was 'The Art of Camouflage', i.e. how to blend into jungle or forest surroundings with readily available means. It is a very simple concept but the Army liked to spend a lot of time on it. I don't know why. We destroyed many a jungle fern patch in the process. It's probably good that Mandai jungle is full of them, but not so in Marsiling. There, we sometimes had to recycle our camouflage.

One time, it was quite hilarious. I think it happened to Blur King (his last name was actually Keng). Instead of using fern (an 'everywhere' plant) he went and decorated his helmet with large CB leaves. CB leaves are actually fig tree leaves. They are large, very suitable if Adam and Eve were underwear shopping. But for camouflage, no. In any case CB stood for the Hokkien expletive "chee bye", which was slang for a woman's privates. Cpl Raja asked Blur King why he was wearing CB leaves. Did he have a "chee bye"? It was funny because Cpl Raja spoke in Hokkien. And he 'crotched' him for good measure. We all had a good laugh that day, even Keng! I think he was so blur that even shame eluded him. But Keng was Keng. More likely he just wanted to survive BMT.

We were enjoying our time with Cpl Raja because he always spoke with sense. He did not insist on strict adherence to one idea because he knew that in combat, there is not just one way to defeat an enemy - a lot depended on the situation at hand. In that aspect, we then better understood why we were learning the stuff taught to us. We also learnt other ways not covered by our BMT syllabus then.

On another occasion, Cpl Raja taught us how to scavenge from our dead enemies. He asked us a very pertinent question: If you run out of bullets, and your dead enemy has a rifle, would you still know how to use one? Up till that point the M16 had been our lifeline in combat. What other weapon was out there? His comment gave us pause. We knew next to nothing except that most of our enemies preferred to use the Russian-made AK-47. As for enemy grenades, our knowledge was zero. My knowledge then was still the stick grenades the Germans had used in WWII - knowledge gleaned from the popular Combat! TV series.  It made us realise, at that point in time, how pathetic our military knowledge was. I made it a point to think more about army stuff when in OCS.

Cpl Raja didn't stay with us throughout our BMT stint. Somehow we knew his place was at some other higher calling, one that did not bore him easily. Maybe one better suited to his talents. But we were real glad for that period he was able to be with us.