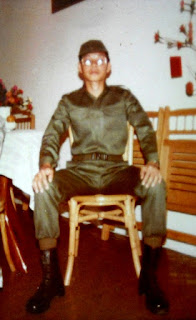 The day finally arrived for me to report to CMPB (central manpower base at Dempsey Road) for pick up to start my National Service. The night before was spent deciding what to pack. My brother - who went through it before - had advice to offer. "Just bring the essentials. You won't have time for anything else," said he. That was rather spartan but true. In the end, I actually did just bring the bare essentials: a cup, toothbrush, towel, bath soap and washing powder (with brush). My brother also said there was no need for shampoo. "You are going to be botak for a while." My mom she was more concerned and made me bring along medicine for diarrhea (as well as Axe brand oil for headaches. She also threw in Anthisan cream (for mosquito bites) for good measure. A week ago, she had also asked her medium friend to give me a "fu" or protection amulet - a piece of yellow paper printed with Taoist symbols and blessed with a red-ink chop. It was then folded into a small triangular shape. She also gave me a token bit of a duck's bill (flat and dark brown) that was supposed to be a symbol of tenacity. I took both the fu and bill and kept them pressed in my wallet. I was never the superstitious sort but did not wish to be disrespectful for her blessings. And I've always humored my mom like that over the years.

For clothes, a pair of sportive shorts and tee; a set of formal clothes for booking out; and of course, plenty of used underwear (faded but still good for the family jewels. But as I found out later, it is difficult to fight a war in loose underwear!) My brother said good underwear was often stolen from the clothes lines, so it was better to leave them at home. He also advised me to bring along lots of rags (to clean out dust and dirt from the bunks and cabinets and for de-oiling rifles). It turned out to be the best advice of all.

I also brought along a favourite white sports jacket (with blue trim and woolen cuffs) in case the weather turned cold. It was bought from Katong Shopping Centre while I was dating a girl from that area. This garment would accompany me throughout my NS journey including my maiden training trip to Henchun (Taiwan) later.

My mom is not a person given to histrionics on farewell occasions. She looks upon farewells as temporary - a chance to say hello again, so my going to NS, though notable, was essentially a non-event. Her attitude has always been: If something needs doing, just get it done. She is efficient and practical like that. And as I was often the family's errand boy who always somehow manages to get things done and return home in one piece, that gave her confidence. I think my mom worried more for my brother during his NS time. He was after all the elder son.

In any case she did assure me that "leong lin pun wui ho fai chow kor" (two and a half years will pass very quickly). Deep down, I knew she worried like the rest of the moms there that morning, but I was also trying to put on a brave face so as not let her worry. I ended up looking nonchalant. My mom's final parting advice was to stay away from those who smoked or took drugs. That's her standard riff during that time. After all, the 70s and early 80s eras encouraged those habits! So I gave her the standard "Hai ler, chi toh ler" (Yeah, I know already), took my bag, climbed onto the back of a three-tonner, waved goodbye and was soon part of a convoy out of CMPB on my way to somewhere. No tears, no wayang. It was 7+am in the morning. The sun was shining and the weather seemed to be in a good mood for the rest of the day.

The army trucks took us to a supply depot in Choa Chu Kang where we got our hair cut and later given our NS wardrobe of uniforms, caps, PT shorts, green socks and shoes - all still in their clear plastic bags. The PT (physical training) shoes were the China-man type: black and green soled - more popular with Boat Quay coolies and trishaw riders than say, top performing soldiers! It would take the SAF some 10-12 years later to switch to Dunlop joggers (or some house brand). We would later get our SBO (skeletal battle order or what the army fellas call a "soldier bra organiser"), backpacks, water bottle, mess tins, toggle rope, etc. from our respective BMT camps.

Our hair was cut in an empty room that had a barber, his wall mirror and stool. We queued, got sheared by an electric shaver and out we went the other way. No one (at least in my queue) made a big fuss. We actually found it quite amusing. Most of us simply rubbed our new "durian heads" and snickered. Actually "durian head" is quite an apt term because a freshly crew-cut head is somewhat green in colour. Somebody I recognised remarked how much I looked like a monk. I know. Fortune tellers have been telling my mom that since I was young.

When we arrived at our BMT camp, we spilled out from the trucks and found ourselves in a huge parade square. All around were three-storey high colonial buildings. Our names were called and we moved to the company and platoon that we had been administrated to. I was secretly hoping to see more of my pre-U classmates in my platoon but the persons I watched were heading somewhere else. I myself was assigned to Platoon 17, Echo Company. 'Echo' I would later learn, was the letter E in military code-speak. Altogether, there were seven companies in my cohort, Company H (Hotel, which turned out to be quite apt) being the last. No one knew what to expect: if their platoon commander or NCOs (i.e. the corporals and sergeants) were nice or the unreasonable sorts. I would later find out that Echo Company was the toughest of them all, with my platoon commander being the chief "siao kow" or Mad Dog.

When we next turned out in our PT kit (blue shorts, green mesh-like tee, woolen socks and black shoes) we knew "civi life" as we knew it then was now in the past. Instead of being nicely spoken to, we would be shouted at; instead of being asked for cooperation, we would be made to run and jump at will or do inexplicable things like cart your metal cupboard three stories down to the parade square in double quick time. We essentially became nobodies and, that was precisely what our platoon sergeant told us in no uncertain terms that very first day. "Recruits, do you know why you are called recruits?" he'd asked in his Chinese-accented English. He was a fit, shortish fella with straight hair and who was surprisingly fair and smooth complexioned. In that aspect, he was quite the "gu niang". But as he was a sergeant (going by that Combat! TV character stereotype) he should be quite the troop leader and also gung-ho! Sergeants are supposed to be tough like that.

"Recruits, do you know why you are called recruits?" he asked again.

We looked at one another, uncertain if to answer or not. In my head I knew we weren't recruited but sent there by law. The first rule of BMT training - my brother had warned me - is not to be "garang"  and stand out too much. And more than that no one likes a smart-aleck, so I kept quiet.

The sergeant continued, immaculate and smart in his crisp No. 3 uniform and looking very much the parade commander with his pace stick tucked under an arm. "You are called recruits because you have no rank. You are nobodies. Even a private is higher ranked than you!" That I found to be disconcertingly true. Imagine being ordered around by a neanderthal low-life of a private soldier.

"From today onwards, when we ask you to jump, you jump. When we ask you to Drop 20, you Drop 20. Is that clear!" A nervous lone somebody shouted "Yes, sir!" and afterwards looked sheepish. A few guys found that funny and snickered.

"And one more thing. You will not call me sir, I am not an officer. I am Sgt Wong. IS THAT CLEAR!"

"YES, SIR! SGT WONG SIR." Clearly, we needed time to get that right.

A corporal standing by the side drawled, "Sgt Wong, lah. Not sir...."

"I SAY AGAIN, IS THAT CLEAR!" Sgt Wong bellowed one more time, face showing red. We did our best to shout back "Yes, Sgt Wong!".  But Sgt Wong would have none of it. He teased us in a low voice instead. "I can't heeear you...."  It took another three YES, SGT WONG! before he was satisfied. So, life as a recruit was going to be like that.

I looked to my right and found a kindred soul; he seemed to be thinking the same thing. We later spoke. His name was Kwong and he, like me, was a troop commander of a uniform group during junior college time (we both were from CJC). But he was in the NCC uniform group though.

Before we were dismissed, Sgt Wong introduced us to our respective section corporals. Present were two of them. Apparently a third would join us later. He turned out to be Cpl Raja: a square-jawish Indian with a head too big for his small, sinewy frame. He wore a red beret which sent out alarm signals. Uh-oh, don't commandos wear red berets? My life as a fresh recruit at that instant took another ominous turn. First, we became nobodies; then we got a commando as a section head. My life in BMT seemed to have gotten off on the hard track! Am I going to have as tough a time in NS as my brother did? Maybe worse! I wasn't far wrong.
Posted by TC Lai at 8:46 AM