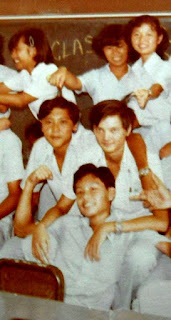 I got my notice for National Service via the mail. It was typical of the many sort of envelopes I would receive for the next 20 years. Letters from the army were always cyclo-styled on jotter paper that turned yellow with age.

I looked at my letter but didn't think too much of it then as I was in the midst of a hectic two-year junior college program. All of us boys knew we were going in for BMT (basic military training) once we finish with our GCE A-level exams. To us, what mattered more was whether we would have a break or not. As we were A-level students, our BMT start-date was either in December or March. (The polytechnic graduates would start in June or September due to their different academic year.) Many of us, of course, would rather have a break than start NS straightaway, especially after such a trying time studying for those all-important finals. For those of us involved in sports and ECA activities, life in JC was basically a blur; We had to shuttle from tutorials to lectures to tournament venues and uniform group trainings, etc. Leaving classes early for tournaments was especially tough: you had to catch up on school work later on your own. In retrospect, I wished I had spent more time with my JC mates. But even then, I was their Class Rep and we had great times bonding in various Inter-Class games. We were an active bunch and we took part in every possible contest - from basketball to football to volleyball and Captain's Ball as well. We event took part in Inter-Class Air Rifle.

The GCE A-level exams were all-important; they determined whether you were eligible for university or not. In any case, the results would only be out in March the next year. I was hoping to be called up for NS later so I could work in those three months of hiatus in order to save some money. But I was called up soon after my last exam paper, which was quite the bummer. Everybody knew how little salary NS men earned in those days! I think it was in the region of $90 - give or take a few cents!

My date of enlistment was 21st December. I know because I kept checking that enlistment slip wondering if it was real or not. Four days before Christmas? Who can forget!

Was I worried about NS? The tough BMT training and torturous punishments? The rumoured suicides?

Well, we tended to hear more of the bad side than good. It didn't help that my brother's NS (he was four years my senior) was exceedingly tough. He was in Armour, the tank corps. His cohort often had little sleep and was always punished harshly. They seemed to spend an inordinate amount of time keeping their tanks clean and free of mud. (What, were they a showroom platoon?) A common punishment was sleep deprivation. The instructors were also not shy of physical abuse (punches). Listening to my brother's tales, I thought how misguided NS was. Shouldn't we treat our trainees better? After all, we are only citizen soldiers. Besides, patriotism cannot be pummelled into someone with violence and rough tactics; it has to be cultivated through reason and passion.

Perhaps I had read one too many GP paper in JC and had become more philosophical. What I didn't know at the time was that the Singapore Armed Forces employed Israeli advisors who had some very tough ideas on military training. (Israel and Singapore, being small nations surrounded by bigger and often hostile neighbours (similarly Islamic), was thought to share some common threats and concerns, not least also a Citizen Army). But I've always felt that they were they, and we were we. Singapore didn't fight an all-out war with its indigenous people to stake a claim on a piece of land. Ours was more a political victory over those ideological left-wing Communists.

In any case, I was very interested in things Psychological and Psychiatric at the time (e.g. Lang, Berne, Jung, Freud, etc.). So I was more inclined to bettering the human condition through counsel than threats. I also believed strongly in being efficient and economical as a fighting unit after having taken karate-do for four years. We could be good soldiers without needless drills and inordinate punishments. Wars were basically task-oriented objectives, no? You do whatever to win, get results, be safe.

Growing up, I had always been been a very skinny kid and my dad encouraged me to take up Martial Arts (Karate-Do). It gave me much self confidence. I also studied Judo and Akido on my own and could do pratfalls without hurting myself. In Judo (and Akido) you gain confidence in tackling someone bigger. I came away from those lessons knowing no one could bully me. I also learned how lethal some of these martial arts moves can be. It isn't at all like the way they were portrayed in the movies (and certainly not at all like the Indian ones!) It is very easy to hurt someone if you only know how. It's also the reason why martial arts opponents prefer to walk away from trouble than fight. Unless they get cornered into a life-threatening situation.

Besides Martial Arts, I was also a National Police Cadet Corp Cadet Inspector during JC. We went through a tough two weeks of training at the Whitley Road Police Academy to earn our rank. After that, we were sent to take charge of secondary school NPCC units. I was given the double assignment of taking care of St Theresa High and St Theresa Convent schools affiliated to the St Theresa Church in Kampong Bahru. The schools were either All-Girl or All-Boy. I remember spending a lot of time trying to overcome their shyness with one another, and the girls - with me.

During my time with them, I taught them camp craft, survival skills and foot drill. Yes, I was trying to give my charges more than just the perfunctory NPCC lessons, which, by tradition, concerned itself mostly with marching, foot drills and the polishing of boots. At the end of the day, even if we weren't as mud-dirty as our friends the Scouts, we did our fair share of outdoor hiking and camping. If Sarimbun was the Scouts' playground, Pulau Ubin was ours. We climbed obstacles, swam at sea (plenty of sea-stars), and cooked Maggie noodles with well water.

However, despite all these, my main task as Cadet Inspector was to prepare and train my kids for the annual Inter-Unit Foot Drill Competition held at the Police Academy. We didn't do too badly in the end.

So, since secondary school up till pre-NS, my drill commands and footwork had been top-notch. (In my final secondary school year, I was commander for a Founder's Day parade.) Given my NPCC background, I half expected to be called up for Police NS rather than Army. Either way, I felt ready.

So, despite my brother's travails, I was not put off by my impending two-year NS stint. I was also rather gung-ho about new ventures and this rite of passage was no different. If NS was going to be silly, well, it was not going to happen to me. I would change it. I would do NS my way.

Next story: Becoming a Nobody
Posted by TC Lai at 10:18 PM

Email ThisBlogThis!Share to TwitterShare to FacebookShare to Pinterest
Labels: National Service, NS After A Levels, The Call Up