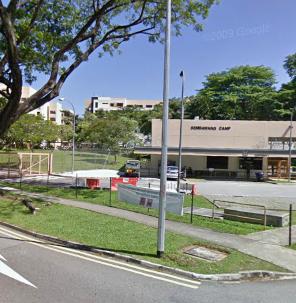 The place where I spent my first three months of NS training is not Pulau Tekong. It was ITD or the Infantry Training Depot in Sembawang. Me and my classmates had heard of it moving to Tekong Island but I was secretly hoping to attend the one at Sembawang still. Partly out of nostalgia (it was an institution!) and partly because my brother did his BMT there. When ITD was finally moved to Tekong Island, the camp was turned over to the Navy (where, before, my brother had done his Midshipman training). It is now home to the SAF Yacht Club amongst other things. But the road that circumscribed the camp was chopped off near the entrance due to public road expansion. The old Admiralty Road West was a single two-lane road, not the dual carriage way it is today. You can see the truncated road in the picture on the left. It is closed off by a peach-colored gate. The guardhouse was much smaller then (in a colonial building) and situated nearer to the road on the right. An old, giant metal swing-gate used to stand between Recruit camp life and Civilian life outside.

I think my batch was the second last to have their BMT training in ITD Sembawang. It turned out great for me because I lived in Marsiling then. The camp was just 12 minutes by bus to my home. I used to joke that by the time my soldier uniform was washed, starched and dried, my fellow recruits were still making their way home to some ulu part of Singapore. It felt good to be so near home even though I spent most of my weekends resting and savouring home-cooked food.

Oh yes, we had to starch our uniforms back then, especially the No. 3, which was for formal or lecture-room occasions. The No. 4 was the one we wore out to the field to rub shoulders with the trees and mud. At the time, we still wore the all-green cotton uniform that later became a favourite with construction workers after the Army went camouflage with their fatigues.

At first we hand-starched our uniforms. But later, we started using spray-on ones; it was so much more convenient! And to iron the hardened uniforms properly, we used the heavier China-made irons. These were  the simpler ones with the single arrow-knob, black bakelite handle, and shiny stainless steel body. It's still being sold. It was so popular, each bunk had one such iron. This iron was pretty hot and reliable. At times, we would use candle wax to 'smoothen' the iron face if it got all sticky from careless use.

The candle also came in handy when polishing our boots. We would use a heated upturned spoon to apply melted kiwi to the toe caps. It was easier to polish with a felt cloth afterwards. These were our "tools of the trade" so to speak. I was in NPCC so I was already familiar with the art of polishing leather-capped boots to a mirror finish. Back in school, my classmate Bay Swee Lak was the best at this. He made it look so effortless. Now, looking at my hapless fellow recruits who were never in the uniform groups, it became my turn (and those who had been in NCC too) to teach them. Knowing how to polish your boots quickly and well took a lot of stress off your BMT. The corporals and sergeants often used that as an excuse to exact punishment. The toe cap of the boots, they'd tell you, had to reflect their pearly whites when they smiled. If it didn't, you would have to suffer the wrath of their frowns instead.

Still, when these 'slave owners' wanted to punish someone, they always found ample reasons. This was especially so during Area Cleaning inspection. An overlooked window ledge, a cupboard shelf or window louvre, a crinkle on a bed sheet, some spilled foot powder, etc, etc. And if your face was the sort they didn't like (for some reason), they would punish you even more. My section had its fair share of unlucky faces. The guy whose eyes forever looked sleepy; the fella with the 'blur sotong' look; and the one with the "kwai-lan" face (Hokkien for obnoxious) The last was probably the worst off. No matter what you do, the corporal or sergeant would think you were being rebellious or had an attitude. It did not matter if it was implied or not.

We had a guy like that who was picked on by our section heads and platoon sergeant. It didn't help that he also came from a rich family. He was often asked to drop extra or do additional cleaning jobs. That's how some folks got more "tekkan" than the rest of us. Another fella suffered at company level (three platoons make a company in military organisation), meaning he was picked on by the Company Commander himself. He was rather slow and blur and was treated like the village idiot. Sometimes meeting officers like that make my blood boil.

So, in some sense, it helped to be born with a face that blended in. (For me, my army pals would later tell me that I  looked serious or fierce on first encounter, like some gangster. Maybe my corporals or sergeant thought better than to fool around with me. In any case, I was very fit and a fast worker so they usually couldn't find fault with me at all.)

Our first few days at BMT was spent trying to get all our army stuff drawn from the Quarter Master (QM, army term for Head of Stores) and learning how to put them on. The first was the SBO or the "soldier bra organiser". They were leftovers from WWII and their straps were not not easy to adjust. As they were held tightly by brass clips. We had to use our bayonets to pry them loose and then hammer them tight again. The pouches where we put our magazines (not the girly Playboy/Hustler mags but the springloaded metal cases that held a rifle's bullets) and grenades were stiff and hard to close, not like the velcroed ones soldiers have today. The helmets (with their inner liners and straps) were also ex-WWII - not as secure and fitting as the present day ones either. They tended to rock about on our smaller Asian heads when we moved about in them. That funny scene of Frodo and Sam emerging from Cirith Ungol in The Return of the King movie dressed as orcs best describes how we felt (as 18 year olds)  in those old army field wear. They were oversized, clunky and ancient.

I do not know the history of ITD camp very well. As a camp, it was huge. As mentioned above, the parade square was large and surrounded by colonial style low-rises. They reminded me of those on Sentosa Island. My Echo Company Block was not too far from the cookhouse, which was nice when it came time for night snack. We didn't have to walk very far. We could also could get back to our bunks faster after lunch for a quick siesta.

Elsewhere, the camp had a field, an obstacle course, and a section with a pool occupied by the Navy. It belonged to their Midshipmen School. The camp also had its vehicular pool (garage, basically) of three tonners and WWII Landrover jeeps. I learnt to drive one of these later as an officer. It was quite the experience steering such a relic.

Anybody who has been to ITD Sembawang can tell you two things: the Gift Shop and the ITD Circuit.

I laughed when I first heard of the Gift Shop. We weren't tourists and certainly had no money to buy gifts!

As a recruit, that gift shop was the lifeline to many things - stuff you needed for the Army (e.g. black tape, black marker, green mug, featherlite (a cloth for cleaning rifles), cleaning brushes, epaulettes (rank insignia), buttons, socks, shoelaces, disposal underwear, soap, etc, etc) - things that the army did not give you enough of or that you had lost (i.e. signed 1206 for); things that civi-life offered: sweets, snacks, magazines, etc; things that connected you to civi-life: e.g. that All-Important public telephone.

The ITD Circuit was that road that ran round the camp. Everybody used it for evening jogs and exercise. The 2.4km run. Platoons and sections would come and go on it, same with vehicular traffic. With my platoon, it had added significance. That circuitous road was meant as a tortuous road to build up our endurance. I am not sure if this circuitous road had a name, but to us in Platoon 17, that road might as well have been known as the Thai-Burma Railway. Our Mad Dog platoon commander made us Fireman Lift our buddies round it all the time, almost breaking our backs.

By right, such overly physically punishing stuff should have been outlawed, but we were the only ones doing it. You can read more about this in the blog 'Mad Dog Wee'.

Next story: The First Two Weeks
Posted by TC Lai at 11:31 PM