A Time of Changes 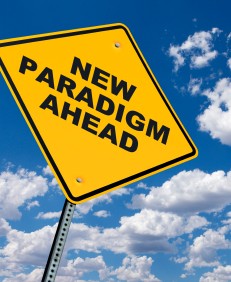 My time in National Service was characterised by changes. Changes to the uniforms we wore, gear we carried, style of man-management and doctrine.

It is best encapsulated in how I started my NS in starched No.3 and then exited it wearing the camouflaged No.4.

In many ways, my batch were the "in-betweeners" - folks who sampled a little of the old school 70s and had a taste of where the SAF was heading in the 80s and beyond.

The changes started intruding when I was in OCS Senior Term. One day, we were told to report for a lesson in casual No.4, boots brushed. Not the usual stiff No.3 with polished boots.

Really? Serious? No more polishing of boots? Woo-hoo! I could literally hear whoops of relief echoing through the corridors of our Delta Company.

The next change came the chance to wear new camouflaged uniforms. We knew there were two designs up for selection, but on that day, they gave to us the Commando one, the design with the narrower camouflaged stripes, those that looked like jiggly strips of chopped cabbage. It was made of cotton, and when washed, would wrinkle more because of the extra colors. No matter. We were the first Infantry men to wear camouflaged uniforms in public. It was National Day Parade at the Padang.

However, soon after the parade, we returned the uniforms, gave our feedback and heard nothing more on the issue.

The next change was to exchange our 20-round M16 magazines for 30-round ones. We were glad because the old ones would empty very quickly with just a few pops of the trigger; we had to reload frequently. With the change in magazines came the new SBO. We, after all, would need new pouches to carry the longer magazines in.

The old SBO was terribly stiff and we had skin burns while trying to climb that low wall in SOC or when 'fireman lifting' a buddy. The ammo pouches also could never close properly and the strap hooks always needed black tape to keep in place. Not long after getting the SBO, we got our new fullpack as well. The new pack was miles better than the old one. For one thing, it had side pouches we could actually close. Previously we would lose things (such as the aluminium tent pegs) when our fullpacks got thrown into the three tonners. We had to resort to packing our stuff in plastic bags to make them chunkier in those lousy pouches. Because adventure shops then were selling better stuff, we were very happy to get rid of these WWII relics once and for all and begin to adopt more modern gear.

Perhaps the biggest change I've ever encountered during my time was when I passed out of OCS as its first batch of Mentor instructors. The Mentor system at the time replaced the old Tactics Team system, which had been training cadets for quite a while... my batch included.

I didn't like the Tactics Team instructors very much because more often then not, they were rather ill-tempered and abusive. There was also a 'us versus them (cadets)' mentality because come lesson time, we would be handed over to whichever team was conducting the lesson. Our platoon commander and platoon sergeant might not be even present, and so, we would be left to the mercies of these manic instructors.

One celebrated incident happened during Evade and Capture, one of the last exercises of our Senior Term. An instructor got overzealous in his role as tormentor and hurt a cadet. I believed the cadet got whipped and hung too long from a ceiling. This kind of thing would not have happened if the new Mentor system was in place. Under this new system, the whole nine-month OCS course would be handled by the cadet's own officers, i.e. PC and PS, with the help of four Mentor instructors, each assigned to one section. The respective company commander was overall in charge of the whole program, so no one would want to see a cadet under their charge hurt.

I did not continue as Mentor instructor but switched to join the Demo Team as its new head. It was quite fun because together with the Weapons section, we were the only specialist instruction team left in OCS then. It's ok, we were decent instructors well-loved and respected.

Another incident with the old Tactics Team instructors happened to my platoon mate and topo partner Sam. We were rushing to our next checkpoint in the forest because we were running a little late. We were glad to finally spot the checkpoint instructor who was sitting on his foldable 'safari' stool chewing on a stalk of grass. He wore a soft Ranger hat. We went up to him and reported.

Instead of asking if we were having problems, this instructor looked us up and down and started berating: "Who do you think you are? Two slow ladies?" Sam and I got nothing to say. We were late, but only just.

"Are you sure you are even a man?" With that, he grabbed Sam's balls and squeezed. Sam was shocked and stood paralyzed. I too was shocked and instinctively grabbed my rifle. I don't know what I would have done if that instructor had not let go. I think he must have seen my intention and turned away. He gruffly signed our map with the next checkpoint coordinates and bellowed us to get the hell out of there.

Along the way, I asked Sam if he was ok. He mumbled something, and I could see that he was tearing up, probably more from disappointment than shame. Did that instructor have to do that?

Back in OCS, I popped over to Sam's bunk to see if he was ok. As usual, he had his Christian songs on. He seemed to have recovered his composure. I asked if he wanted to complain to our PC. He replied no, that  he didn't want to stir up any controversy and so would just let it go. Sam was a good chap. Enthusiastic and athletic. It made me wonder why that instructor had picked on him. Well, it could easily have been me instead. Sam was certainly no "gu niang". After OCS, he went and joined the Commandoes.

Another big change came when I was already an officer and settled into my role as Demo Instructor. I received a memo to attend a class on Transactional Analysis, or TA.

I'd read Eric Berne (the father of TA) as a schoolboy out of personal interest, so knew what it was all about. I was just surprised that the Army was embracing it.

TA is all about ego states and ids, that primary force that drives our desires and wants. According to Berne, we present ourselves in three ego states whenever we engage someone: Parent, Adult, Child. We switch ego states depending on whom we meet (real, ego or imagined). If we meet someone needy (Child) we might turn on our protective self (Parent) - it all depends on what kind of emotional reward we want to get out of that social transaction or how we might want to handle it. Why TA is called, well, TA.

Berne's work is best understood in his seminar book "Games People Play". Many of its examples, however,  seem to illustrate how one might deal with people with addiction and unreasonable behaviours. After finishing that book, you will be able to recognise emotional blackmail in all its varied and sneaky forms.

How then could TA be applied to the Army? Were all its officers and men masters of emotional blackmail that Eric Berne had to be called upon for help? (Haha)

The obvious help that TA could provide were those essential insights into our ego states whenever we communicated. More often than not, the relationship between officer and men was one of authority and subordinate. If officers presented themselves less as a Parent, would the subordinate respond less as a Child? An Adult-Adult transaction is often (mistakenly) deemed to be best, but emotionally, the pay-off is low. So, there's no point in harping why we can't be all Adult all the time. The best is to recognise a transaction for what it is.

And so, I think TA helped ushered in a new age of Communication and Understanding between officer and men and between everybody else at the time.

I think its impact cannot be underestimated. It probably helped to empower individuals to think more for themselves and for the Army to approach productivity from bottom-up than top-down. WITS (work improvement teams) was highly popular and functional in my time.

A Child after all doesn't grow if it is not asked to be Adult.

That said, for a while afterwards, there were many officers in OCS who walked around with rather confused minds and egos. Should I present my Child? Or wear my Adult. Maybe I should rein in my Parent. Haha. It was an interesting period.

But there was no confusion when the SAF decided to promote warrant officers to junior officer status. To me, that was long-time coming. I've always believed in ability rather than rank. And something like a silly school certificate should not stand in the way. The SAF is a specialised force unto its own. It can do whatever and however it wishes to capable within its own ranks. No need to follow what happens in the civil service where paper qualifications are everything. I am glad there is a better through-path for capable soldiers now. And a recognition that not everyone with bars on their shoulders are effective leaders in peace time or war. Leadership is the most important asset in any army.

The next change in my NS life came when we started to wear the new two-tone coloured No. 3 for official duties. It was without doubt a  hands-down winner over the old starched ones. And we got to wear our berets too.

Of course, the final change came when I traded in my Temasek Green uniforms for those new insulated camouflaged No.4s. They were warmer to wear but protected us better from scrapes. These 'camous' stayed the standard No. 4 uniform for quite a while. Only recently was it replaced by the new 'digital' camous that is lighter green in colour.

You know your uniform has passed into history when construction workers start wearing them as work clothes. It happened to my Temasek Greens. Now it is happening to my 'broad patch' camous. These workers do recognise a good set of work clothes when they see one.

After note: During my time, the man-carry 60mm mortar was retired from service as well. Took three fellas to carry it including ammo. They were very heavy and everybody tried to "siam" carrying it during training. But it was a very useful near-range artillery weapon which was replaced by the M203 grenade launcher (which we also learned to handle). Next story: Brunei Training 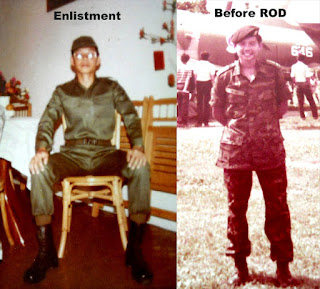