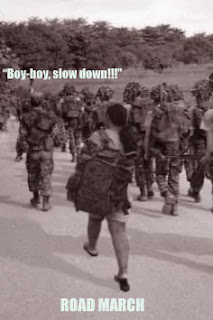 We all make fast friends during National Service. And remember memorable characters who have crossed our paths. My good friend and partner in crime during BMT was Kum Fatt, a tall athletic chap who at one time was good at playing basketball and volleyball. He came from St Andrews JC, a college better known for its outgoing students and rugby.

One of the reasons Kum Fatt and I got along was because we were both Cantonese. We also shared the same sense of get-up-and-go and getting things done without fuss.

In our platoon, we were known as the two "lead singers" - folks who led the platoon with cadence songs during road marches and 5-mile runs.

We often took turns so as not to exhaust our vocal cords.

You know the songs:

- "Here We Go Again" (and again)
- "Left, Left, Left-Right-Left"
- "She Shall Be Coming Round The Mountain" (when desperate)
- "Airborne Rangers" (taught by Cpl Raja)
- "Training To Be Soldiers" (many variations)

and some more I've yet to recall.

The last two songs were the most versatile as we could append all kinds of lyrics to them... some R(A) and rather funny.

I don't know how we got started but I think it was because we couldn't bear the silence when our sergeant or corporal demanded a song request. They would normally just say "Song!" (articulate they were this way, haha!)

I have always held a mike in school so it wasn't much of a problem for me to take the lead, even if the songs I sang in school were mostly the National Anthem and reciting of the Pledge. And with the outgoing Kum Fatt, there was no contest really.

Kum Fatt was outgoing, but he was not the mad-party type. He's the kind to call upon if you want to go on an adventure. We did that once exploring Mt Ophir together with two other girls, both ex-schoolmates of his. I think he was trying to fix me up with one of them - the skinny one with the surprisingly loud snorting laugh. Other than that, she was rather nice and a good sport.

That trip was memorable and took place in the late 80s. Mt Ophir was still as I remembered it the first time I scaled it some five years back. At the time, all that stopped you from reaching the top of that big rock at the summit was a thick rope. Later, a ladder was added. Along the way, we also set off firecrackers.

The road marches we took during BMT were often the 10km ones in Full Battle Order. We would march along with our rifles slung low across our chest, arms resting on the butt and barrel like some "lao chiau" (old-bird) soldier.

We would often start off brisk and end up strolling back. Near the very end, a mad dash. If for some reason our company commander was not happy, another road march would be scheduled. I think it happened once for some very sloppy timing.

I remember marching in the Lim Chu Kang and Ama Keng areas. On each occasion time, Kum Fatt and I would take up position - one at the front and the other at the back. When one of us got tired of singing, the other would pick up the slack. Two other fellas: Hui Tong and Tim Kum, would play backup. Hui Tong had a raspy voice, so he was more enthusiastic then song-able. Tim Kum was simply game. Both were tall chaps. I remember the guy at the back had to carry a red flag as a safety precaution.

We did not have any major incidents during any of our road marches except for a couple of really slow stragglers. It was always the same few fellas. One of them (I think) simply had a medical condition. He was small and his chest seemed to stick out more than usual. He claimed he had have a slipped disc before.

In our own platoon, we encouraged each other by keeping pace or slowing down deliberately as a group. During such road marches, rain was always a welcome relief, but only if later. Too early and we could end up with 'cloth burn' in the most embarrassing of places.

After BMT, Kum Fatt, like me, went on to OCS. But he ended up in Signals. Me? I got sent to Infantry. I believe Kum Fatt got sent to Signals on the strength of his school results in math. He might not have been very good in the other subjects but he was a natural in math - why he also excelled in gambling. Kum Fatt had a penchant for card games. For a while, he did rather well, especially at a pub in Boat Quay where there were regular sessions of card games in the evenings. He tried to involve me once but I was never patient with cards or games involving luck. Mahjong was ok because I grew up with it. I also didn't enjoy smoking and drinking beer. I was rather a sports fanatic then and took care of what I imbibed, even for leisure.

One time, Kum Fatt taught me how to play "si ki pai" - that Chinese stick-card game. I learnt it at one go, but each time we played, I would lose to him. It was very surreal because it was like 100%. What happened to my luck or chance?

After we RODed, we kept in touch. Kum Fatt would often round up his St Andrew buddies (and there were quite a few of them, both boys and girls), rent a 14-footer truck and then go driving around Singapore. We would sing and talk-cock behind while he drove. He would always complain afterwards that he felt left out while driving. We would pacify him with food and conversation. Being the nice guy that he was, the matter would soon be forgotten.

But we did have wonderful times stopping at beaches, Mount Faber and hawker centres along the way. Such outings would last till the next morning. One time, we trucked during Chinese New Year. It was a great way to visit one another and for singles to band together to do something as a group and importantly, to get away from relatives asking that annoying 'When are you getting married?' question.

One of Kum Fatt's first jobs was with Walls, the ice cream maker. It was rather fun then as he would bring samples of new products to share with us. I remember the time Walls launched their up-market Viennetta range. I think it was the first time a local ice cream company did that: charge a premium price for a slightly fancier ice cream.

It turned out that his colleagues were from Lever Bros' Health division. Not Desserts.

Kum Fatt was laughing when he opened his car boot to pass me the samples. "See how you can make use of it," he said in Cantonese. I laughed and said something like: "What the hell..." I joked whether Walls were having a promotion, like 'Buy Viennetta and get lube free!' Viennetta was, after all, pitched as a smoother and sexier dessert.

Kum Fatt was generous like that. He would give the shirt off his back if necessary. In life matters, he was pretty easy-going. I only wished he had done something more with his natural talent in math, like go into stockbroking. But after Walls he drifted from one job to another. I do regret not pulling him into Engineering with me. Sometimes, it is not good to be too caught up with one's own affairs.

My actual buddy during BMT was not Kum Fatt but Lawrence, who too came from St Andrews JC. But unlike Kum Fatt, he was a rugby player. He looked the part with his muscular shoulders and short neck. His jutting square jaw also made him look extra determined as a tackler on field.

He was my buddy because in those days, we all got paired by height. Although he was as tall as me, we did not weigh the same. He was heavy whilst I was light. Very light! I was bone light and entered NS at 48 kg. I exited it at 52 kg, not a whole lot more!

Our huge difference in weight (almost 10 kg) was a problem especially when Mad Dog Wee (see other blog) made us fireman-lift each other along that circular road around ITD Camp (now truncated due to road expansion). Whilst I struggled each time, Lawrence would run as if I was a fly was on his back. Although I suffered when lifting Lawrence, he wasn't having an easy ride too. My bony shoulders would dig into him and cause him to complain that his balls hurt after each back-breaking fireman-lift run. But mostly, he felt bad that I had to carry his much heavier frame.

"Fly" is the right term to describe me then. Later in OCS, we all had to take up boxing to train up our aggression (rugby being the other). I was placed in the Light Flyweight class (weight limit being 49 kg).

In boxing, we were supposed to fight fellow cohort company Foxtrot, but we ended up fighting among ourselves at Delta Company, especially Pl 10. The reason was that many of the Foxies got disqualified because of poor eyesight (i.e. being bespectacled). The same reason also disqualified many of the studious types in scholar platoons 11 & 12 in our own company. So, we were left to compete among ourselves which was a bummer.

In the finals, I was matched up with Leong my platoon mate. He was a nice chap with a droopy look not unlike Stallone's. But Stallone or not, I won my weight class that day. However, there was no joy in winning because I gave Leong a black eye. It was one of the weirder moments of my time in OCS... having to out-punch my own platoon mate!

They should have just scrapped the whole stupid contest when the Foxies were retired. What's the bloody purpose in fighting your own friend and mate? Aside from that, I learnt that boxing is not an easy sport, especially when you have skinny arms more suited to wielding a 90 g badminton racquet than gloves that weighed a ton after just five short rounds. Anybody who had boxed before would know.

Note: Two notable characters from Foxtrot Company were Philip Jeyaratnam and Ishak Ismail. The first is JB Jeyaratnam's son. The second is Singapore's currently highest ranked Malay officer (Brigadier-General). Philip was pretty low profile then (well, I was in Delta Company). Ishak was the more talkative and outgoing. Like Gerard (see The Gilman Camp Incident) he too was from my 'outgoing' JC. And the tubes of lubes? Well, they remained in my cupboard for many years. When I finally cleared them, they were dry. Very dry. Quite ironic. Tubes of lubes that couldn't help themselves. Next story: Mr Sign Extra
Posted by TC Lai at 5:24 AM