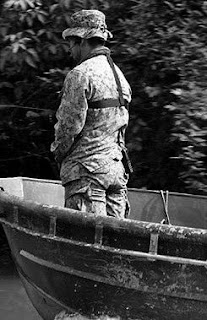 One of the things I learnt in that Infantry Pioneer Conversion Course after OCS was boatmanship. That's how to handle a boat, specifically the aluminium assault boat that the SAF used at the time. More accurately, it is an open-top launch, or in local parlance: sampan. We learnt about its outboard motor and how to fix FOPs or Frequently Occurring Problems.

At the time, we took our boats out from the SAF Changi Slipway, a place where they also stored those giant amphibious Combat Engineer bridging vehicles. Once out at sea, we would travel to Pulau Serangoon or Coney Island to practice. On most occasions, it felt more like we were going for a beach picnic than actual training.

After graduating from the IPCC course I returned to OCS as an instructor, forgetting mostly that I had boating skills. I taught cadets weapons and demolition, not how to skim the coastal seas.

Who would know that one day, my school's chief instructor would call to ask if I was qualified to drive on water. He must have known or else he wouldn't have asked that question. I answered with a hesitant yes, as one would to such obvious questions. "I need you to go fish up our cadet. We found him in Poyan Reservoir," was his reply.

The cadet he was referring to had been missing for a few days. He had been lost in a farm area we all used as a topo exercise area. I believed it was one of those advanced but short distance exercises where one topoed alone or in pairs. There was no need for SBO or weapon even - just water bottle Apparently he had gotten lost whilst moving at night.

It wasn't that difficult an exercise as it involved mostly walking along normal roads outside some farms. The only danger was the farms' green-scum ponds; they were usually flimsily fenced up. Plop into one and there's no telling how deep they went or even how the mud below might suck you in and never let go.

By the time I received that call from my CI, we had been searching for the missing cadet for four full days. Each company took turns to send out cadets and officers to join the search; more so folks from his own company. But although the area of ops was small, we never found a trace of him. It was all very puzzling. Where on earth could he have disappeared to? Every time something untoward happened in our school, all of us would feel as if it happened to our family. The school population wasn't large and we were pretty close-knit.

The cadet's family was distraught, as one would expect from any family with a child in NS. On the third day, when it became apparent that he could be in danger, his family sought the help of a medium to locate him. The medium said he would be found sitting under a tree, which was no help at all. But still, the searchers paid particular attention to places where trees or a small patch of jungle could be found. It turned out to be a fruitless lead.

When they did eventually find him, he was lying face down some 20m from shore in a reservoir. In a direction that was 180 degrees from where his exercise area was. How could a training soldier end up there?

That day, after that conversation with my CI, me and team members headed straight for the reservoir. An SAF boat was already waiting for us there on the bund road. I had the foresight to bring along a groundsheet as I figured we would need something easy to fish him out with.

A body immersed in water that long is not pleasant to look at. When we first sighted him from the boat, he was lying face down in the water near some reeds. Parts of him were sticking out of the water: back, elbows, buttocks, and boots. He looked as if he was skydiving. I noticed something unusual: His uniform was all bloated up as if somebody had blown air into it. We surmised it was probably due to gases released from his own decomposing body.

We slipped the groundsheet under him and scooped him aboard the launch. Back on shore, we flipped him around on his back. He lay there as if frozen in shock, hands clawed. His face was bloated and his eyes were popped against his black-framed glasses that now appear to be too tight on his head. A black velcro band was holding it in place, the kind found commonly in army gift shops. He did look as if he drowned. However, we could only be sure until an autopsy was performed.

Someone gingerly emptied his pockets. Everything was there: black notebook, pen, map, money. This meant that he was not attacked and robbed. So how did he end up where he did so far and diametrically away from his training area and at such a distance from shore?

No one got an answer to that one, perhaps not even today.

For me, it was the first time coming into contact with a dead body like that. I recall the cadet smelling like week-old socks. I believe our bodies all smell like that after we die. That is if there is a body to see up close. I think for his parents, this was only the consolation they got from the whole sad episode. But it is scant consolation. No young man should perish while doing National Service for their country; and not without an explainable reason.

As is with cases like these, a BOI - board of inquiry - was formed. But as usual, we were not privy to its findings. The case was soon forgotten after his own cohort was commissioned and passed out. But this was not the only incident of its kind in OCS during my time. A terrible accident involving explosive charge simulators got us all shocked and unbelieving again.

After-note: My own guess is that the cadet got lost and then got chased by dogs - why he ran into the water and accidentally drowned. It's all speculation though. I don't remember anyone offering this explanation at the time. But it is always good to carry a stick when passing through farmland. It is useful for beating back dogs when not carrying an M-16 around. Related story: Lost Fingers